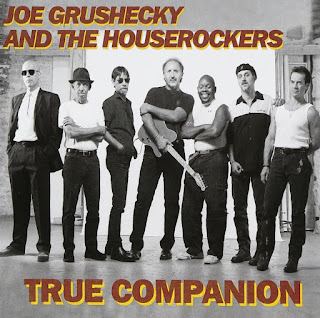 Pittsburgh’s Joe Grushecky may well be rock music’s least-known cult artist, his longtime backing band the Houserockers the best bar band in America. An underrated songwriter and storyteller and a guitarist of no little skill, if not for his connection with fellow blue-collar rocker Bruce Springsteen, Grushecky would get no respect at all. In the eyes of many critics, however, Grushecky’s 2002 solo effort Fingerprints outdistanced Springsteen’s The Rising in both ambition and pure rock ‘n’ roll thrills.

Working without the Houserockers net, Grushecky’s solo turn was impressive, but it also proved to be invigorating. Back in the studio with the band he’s fronted in one form or another for a quarter-century, True Companion is the Houserockers’ sixth studio album and first release in almost five years. The time apart has allowed players like guitarist Billy Toms, bassist Art Nardini, drummer Joffo Simmons, and the others to recharge their batteries. The chemistry between band and band leader is undeniable and Grushecky has delivered a solid batch of songs for True Companion, the Houserockers responding with spirited, energetic performances that have more in common with the Stones, CCR, and Memphis soul than with anything you’ll hear on the radio these days.

Grushecky is at his best when writing about his place in the world around him, and True Companion offers several insightful (and revealing) glimpses into the soul of the man. “A Long Way To Go” is a perfect recounting of the joys of rock ‘n’ roll, the lyrics tracing the artist from enthusiastic teenage rocker to middle-aged family man and rock ‘n’ roll lifer who has come too far to quit now. It’s as close to a biography as Grushecky has allowed, the defiant closing lines – “I still want to rock and roll/Hell I’m only in my fifties/And I still got a long way to go” – stating that the old dog still has some music left in him yet.

“Strange Days” is the opposite side of the coin, however, the wondering aloud of a man whose best efforts have been overshadowed by the success of lesser artists. Grushecky has always ignored trends, playing a timeless style of rock ‘n’ roll, although it has cost him greatly. “If only I would have known,” he sings, “maybe I would have changed my look.” He continues “Someday I’m going to write a book/And tell the world out there/About a mighty man they have overlooked/And spread my philosophy/Hey man, it ain’t what you eat, it’s who’s the cook.” Whether we like it or not, age catches up with all of us, and self-doubt creeps in when “all the things I like are so outdated.” Grushecky knows that the world has little place for a fifty-something rocker that few have heard of, yet he continues to hope that “tomorrow’s a better day.”

A Shot of Salvation

It is with the title cut, “True Companion,” however, that Grushecky delivers on every promise that he has ever made to his listeners. With a mournful melody reminiscent of Springsteen’s “The River,” the artist questions his ability to carry on in the face of indifference. In reflecting, he draws strength from those he cherishes – his father, his wife, and his family. Seldom has Grushecky’s guitarwork flown so high, punctuating his lyrics with a lonesome wail that channels the ghosts of a dozen Delta bluesmen. It’s not the only time on True Companion that Grushecky calls upon his family to get him through – “Count On You” is a wonderful love song for his wife, a Southern fried rocker with a funky rhythm and enough joy to share, a musical departure and a lyrical gem.

Grushecky has not abandoned his trademark tales of blue-collar woe on True Companion. “She’s A Big Girl Now” tells the story of a domestic abuse victim that manages to break free and start a new life while “A Shot Of Salvation” offers the lament of every family living paycheck to paycheck in a world where there are “too many songs, not enough soul.” The lively “A Silver Spoon” pokes fun at the privileged few that run this country while “The Shape I’m In” is a hard-rocking accounting of the fears experienced every day by both those who punch a clock and those who have no clock to punch. An electrifying cover of the garage rock classic “Dirty Water” is dedicated to the hometown that has supported Grushecky for decades (and the three rivers that define the city).

The album closes with “Call Him,” the artist coming to grips with the trials and self-doubt experienced across the previous ten songs, finding solace in his faith and the ability to carry on in the face of the dream-crushing daily treadmill. “Well I get up in the morning/And I do it all again/And I never tell nobody/About the pain I’m in” sings Grushecky, searching for a light to lead him out of darkness. It’s a powerful and personal song and a magnificent testimonial. Throughout all of True Companion, Grushecky’s guitar moans and cries and screams like a tortured soul, the Houserockers offering dignified support behind Grushecky’s soulful vocals.

Far too often has Joe Grushecky been compared to Bruce Springsteen, denied his place as a rock ‘n’ roll original. If not for decisions made long ago, or perhaps a stroke of luck or fate’s touch or whatever you want to call it, their roles might have been reversed. Grushecky is a true rocker, an artist of distinctive voice that stands in nobody’s shadow. He keeps struggling to create the perfect rock ‘n’ roll album because that’s all he knows to do. True Companion showcases Grushecky’s best work yet, proof positive that you’re never too old to rock ‘n’ roll. (Schoolhouse Records, released January 27th, 2004)
Review originally published by Alt.Culture.Guide™, 2004
Buy the CD from Amazon.com: Joe Grushecky & the Houserockers' True Companion
Also on That Devil Music.com:
Joe Grushecky's It's In My Song CD review
Joe Grushecky & the Houserockers' More Yesterdays Than Tomorrows CD review
Posted by Rev. Keith A. Gordon at Friday, August 07, 2020