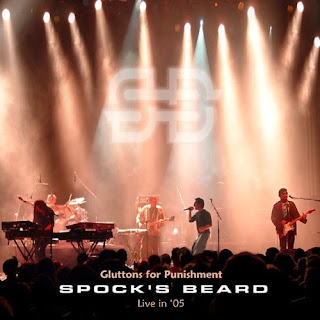 The remaining members of Spock's Beard had a lot to live up to when founding member and songwriter Neal Morse left the band a couple of years back. The major architect of the trademark Spock's sound, Morse's departure forced the other band members to step up and take the reins of the popular prog-rock trailblazers.
With drummer Nick D'Virgilio assuming lead vocal duties and underrated guitarist Al Morse stepping into the spotlight more often, the band took on a harder, rock-oriented edge with its two post-Neal albums, Feeling Euphoria and Octane. The band developed a collective approach to songwriting that took advantage of their individual strength's, bringing in friends John Boeghold and Stan Ausmus for lyrical assistance where needed.

All that was missing was for the "new" band to establish its identity as a top-notch performance outfit, a questionable goal they seem to have rapidly achieved. After all, this is basically the same batch of guys that recorded such classic modern prog albums as The Light and Beware of Darkness. Morse's abdication changed the band's sound and, perhaps, its focus but the talent and instrumental creativity remained in place. As documented by Gluttons For Punishment, the first live set from Spock's Beard, version II, any questions about the band's performance skills were absurd from the beginning.

Recorded during Spock's Beard's Spring 2005 European tour, Gluttons For Punishment, Live In '05 effectively recreates the recent Octane album almost in its entirety and in virtually the same running order as the studio original. Although it's unusual for a band to release a live disc in such close proximity to a studio album, the clamoring of fans evidently tipped the band's hand. There is some embroidery provided the studio versions of the Octane songs, albeit very little, and although the performances are dynamic and multi-layered, one can't help but wonder what a little more time might have added to these songs in the way of instrumental interpretation.

At the End of the Day

The band all but ignores its recent Feeling Euphoria album, covering only two of that disc's songs in "The Bottom Line" and "Ghosts of Autumn," alongside a sparse selection of songs from earlier Spock's releases. "Harm's Way," from 1998's The Kindness of Strangers, provides an ample dose of keyboard wizard Ryo Okumoto's mad riffing while also offering an excellent showcase for Al Morse's understated and elegant fretwork. V's "At the End of the Day" kicks off the second disc, D'Virgilio's vocals taking the song in different directions than Morse's original reading, the tune benefiting from some improvisational jazz-rock fusion styled passages.
Since taking over as the band's frontman, D'Virgilio vocals have steadily improved, the talented drummer also forging a distinctive vocal identity around the band's evolving sound. Nowhere is D'Virgilio's confidence more evident than on the album-closing, nearly twenty-minute revisiting of "The Light" from the very first Spock's Beard album. The vocalist stretches his talents to their limits in recreating the roller-coaster highs and lows and dangerous curves of the song's lengthy and varied performance. Given new muscle by the various players' more aggressive direction, "The Light" is both a reminder of the past and a bridge to the band's musical future.

Spock's Beard remains one of the most intriguing and innovative bands on the modern progressive rock landscape, a wonderful match of talents and musical chemistry that has continuously moved forward for over 20 years. Gluttons For Punishment, Live In '05 is a fair snapshot of this moment in time for Spock's Beard, an entertaining and exhilarating performance from one of the guiding lights of the current prog-rock movement. (Inside Out Music, released May 3, 2005)
Review originally published by Alt.Culture.Guide™, 2005
Buy the CD from Amazon.com: Spock's Beard's Gluttons For Punishment