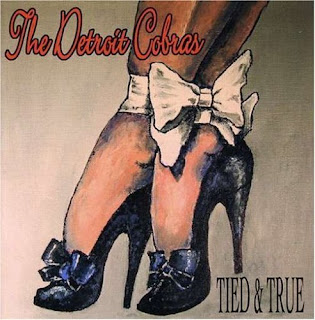 The band line-up of the Detroit Cobras changes more often than a politician’s poll numbers, but the band’s trademark sound seldom budges an inch. Built around a solid core of sultry singer Rachel Nagy and guitarslinger Mary Ramirez, the Detroit Cobras continue to crank out soul-drenched rave-ups and garage rock gems with Tied & True, the band’s dynamic fourth album. With the addition of Memphis guitar-for-hire and boy genius Greg Cartwright of Reigning Sound, and slammin’ bassist Carol Schumacher of the Gore Gore Girls, Tied & True offers the most enjoyable Cobras listening experience yet.

Any old rock band can grab a hit song off the charts of yesteryear and jazz it up for the modern record buyer, usually slaughtering it in the process. The Detroit Cobras, on the other hand, take an old song and handle it like a nebbish collector at a record convention. They treat each one in the spirit of the original, with love and reverence, and they never cease to amaze with their spot-on choices of rare and obscure cuts. Garnet Mimms’ “As Long As I Have You” is provided a cool rocking arrangement, with Ramirez’s and Cartwright’s guitars intertwined behind Nagel’s best upbeat Martha Reeves vocals. “Nothing But A Heartache” is all swooning girl-group goodness, an aged U.K. hit for the Flirtations, a mid-60s Northern Soul band, that the Detroit Cobras play straight with delicious harmonies and soaring vocals.

“Puppet On A String” has a sort of syncopated beat and features a hypnotic guitar lead with great tone and vocals to match while “The Hurt’s All Gone” offers up a fine vocal performance, lush arrangement and authentic feel. A vintage ‘60s R&B classic by the Queen of New Orleans, Irma Thomas, “The Hurt’s All Gone” is about as smooth and soulful as you can get and keep your feet on the terra firma. The Detroit Cobras continue their Louisiana road trip with the wonderful “Try Love,” a Dori Grayson original from Shreveport’s Murco Records. In Nagy and crew’s hands, the lovely romantic tune is supported by gentle shimmering guitar, tasteful background vocals and deliberate rhythms.

Overall, Tied & True is the Detroit Cobras’ best album since their first, the band adding subtlety and tact to their performances where once they depended on balls and bluster. There’s room for plenty for rocking when you’re on stage, but the low-key and relatively subdued treatments provided the songs on Tied & True greatly enhances the material, rather than detracting from the original magic. It’s tempting to call the Detroit Cobras America’s best cover band, but it takes a considerable amount of creativity to grab a song and make it entirely your own. A lot of bands have tried and failed, while the Detroit Cobras keep on rocking, relentlessly… (Bloodshot Records, released April 24, 2007)