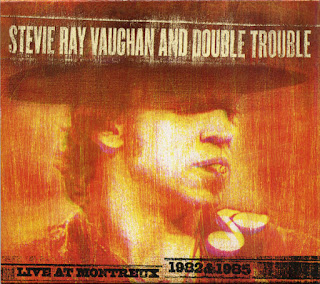 When Stevie Ray Vaughan took the stage at the Montreux Jazz Festival on July 17, 1983, few watching could have expected the subsequent events his performance that night would inspire. The relatively unknown Stevie Ray and his seasoned band delivered a red-hot set of Texas blues to an indifferent and hostile audience. Sitting in the crowd that night, however, was a thoroughly impressed David Bowie, who provided an artistic “coming out” for Vaughan by later using the six-string wizard on his highly-successful Let’s Dance album. Jackson Browne, who also witnessed Vaughan’s incendiary Montreux performance, provided free studio time for SRV and Double Trouble to record their debut album, the ground breaking Texas Flood.

With a pair of critically acclaimed, best-selling albums providing his credentials, Vaughan recreated the blues-rock genre and kick-started a blues revival that continues today. Two years after his Montreux debut, Stevie Ray returned to the festival stage as a conquering hero. This time, the young guitarist delivered another smoking set to a far more receptive crowd than previously. Both historic performances are paired on Live At Montreux, 1983 & 1985, a scorching two-disc set that showcases Vaughan’s considerable live chops and further cements his legacy as one of the greatest guitarists ever.

Listening to these two live performances – one as a brash, youthful guitarslinger and the other as a maturing, confident artist – one can hear strains of Vaughan’s artistic lineage, masters such as Albert King, Jimi Hendrix and Lightning Hopkins. You’ll also hear signature songs such as “Pride and Joy” and “Texas Flood,” refined from show to show, performed alongside such gems as “Couldn’t Stand the Weather” and a cover of Hendrix’s “Voodoo Child.” Much of the material on Live At Montreux, 1983 & 1985 is previously unreleased, the set complimented by extensive liner notes and rare photos. Vaughan’s accidental death in 1990, while on the verge of even greater success, robbed the music world of an incredibly gifted guitarist. If you’re unfamiliar with the brilliant blues-rock of this legend, these inspired Montreux sessions serve as an excellent introduction to Stevie’s world. (Legacy Recordings, released 2001)