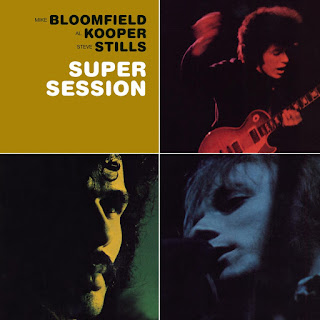 Al Kooper and Mike Bloomfield are two of the most underrated and influential talents in the canon of blues-rock. Both were phenomenal musicians (Bloomfield died in 1981, Kooper now only plays sporadically), insightful and knowledgeable with a true love of music. Both men’s credentials are impeccable. Kooper was, perhaps, the most valuable session player in the ‘60s rock universe, adding his considerable talents to records by Bob Dylan, Jimi Hendrix and the Rolling Stones. A founding member of two seminal ‘60s bands – Blues Project and Blood, Sweat and Tears – Kooper also discovered Lynyrd Skynyrd, producing their first three albums.

Bloomfield was an equally decorated veteran of the rock ‘n’ roll army. A familiar presence on the early ’60s Chicago club scene, Bloomfield made his bones as a guitarslinger with the Butterfield Blues Band. He toured with Dylan, formed Electric Flag with Nick Gravenites and subsequently played sessions with Kooper, Muddy Waters, James Cotton and folks of that caliber. Between the two, they have played on/produced/written some of the most memorable music in rock music. So why aren’t more people familiar with these two? Blame it on the short-term memory, perhaps, of pop culture or blame it on an industry that no longer nurtures talents of extraordinary vision like Kooper and Bloomfield.

Two recordings document the pair’s legacy. At the time of its 1968 release, rock fans had never heard anything like Super Session. Kooper was a staff producer at Columbia Records at the time, dreaming up a project to produce. Kooper thought of his old Dylan session cohort Bloomfield and, with a crack rhythm section in tow, retreated to a Los Angeles recording studio to “jam.” Half of Super Session offers day one of the sessions, Bloomfield’s guitar ringing clear as a bell on the Chicago blues-styled instrumental romp “Albert’s Shuffle,” the nine-minute ‘90s-jam band precursor “His Holy Modal Majesty” and the mournful blues jam “Really.”

Bloomfield was AWOL come day two of the session, his health problems and insomnia aggravated by a growing heroin addiction. Bloomfield simply picked up his guitar and went home, forcing producer Kooper to recruit Steve Stills, fresh from a stint with Buffalo Springfield, to fill in for the missing guitarist. The Stills-dominated tracks travel in a more psychedelic direction than Bloomfield’s blues-rock virtuosity. A faithful cover of Dylan’s “It Takes A Lot To Laugh, It Takes A Train To Cry” leads into a dynamic eleven-minute reading of Donovan’s “Season of the Witch.” Kooper’s vocals and keyboard work on the song are spot-on, Stills’ wah-wah driven six-string providing the fire while the rhythm section of bassist Harvey Brooks and drummer Eddie Hoh provide the pulse.

Super Session spent several weeks in the top twenty upon its release and helped spawn the first generation of “jam” bands (including the Grateful Dead), opening the door to greater instrumental improvisation. This remastered reissue of Super Session includes four bonus tracks, including original takes of “Albert’s Shuffle” and “Season of the Witch” sans horns (which were added to the final mix later) and two interesting outtakes. The success of Super Session led to a sort of sequel in The Live Adventures of Mike Bloomfield and Al Kooper, the live album a document of three nights at the Fillmore West in San Francisco featuring mostly new material. 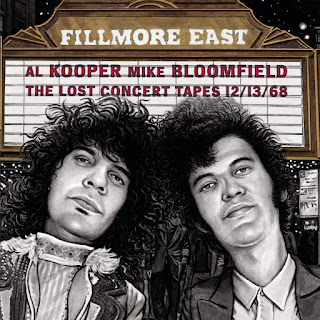 The previously unreleased Fillmore East: The Lost Concert Tapes 12/13/68 is the second of two releases that further highlight the often-overlooked talents of Mike Bloomfield and Al Kooper. Recorded two-and-a-half months after the “live adventures” disc, these tapes were all but discarded after the performance due to engineering problems and musical incompatibilities between some of the players. Rediscovered by Kooper a couple of years ago, the performance has been carefully resurrected, masterfully remixed and skillfully remastered for the digital age. A real treat for Bloomfield fans, any young musician with an interest in the blues should check out this set and hear the playing of a true blues aficionado.

Fillmore East: The Lost Concert Tapes 12/13/68 is a veritable showcase for Bloomfield’s enormous talents, the guitarist dazzling the audience with his fiery fretwork. Bloomfield pulled every trick he had out of the bag for covers of Sonny Boy Williamson’s “One Way Out” and “Big Boy” Crudup’s “That’s All Right Mama” and his original “(Please) Tell Me Partner.” He wasn’t afraid to share the stage, bringing out Texas guitarist Johnny Winter for a scorching take on B.B. King’s “It’s My Own Fault,” the red-hot performance subsequently earning Winter a recording contract. Throughout Fillmore East, Bloomfield’s six-string work is fluid and graceful, Kooper’s keyboard work is subtle and if the rhythm section often seems at odds with itself, it does little to distract from the prominent guitar pyrotechnics offered by Bloomfield.

It could be argued that Mike Bloomfield never played better than he did circa 1968, the Super Session album and accompanying live performances spotlighting his talent at its peak. Bloomfield wrote the blueprint for the white blues guitarist, informing the work of those who would follow, from Jimmie and Stevie Ray Vaughan to Kenny Wayne Shepherd and David Jacobs-Strain. (Legacy Recordings, released 2008)