Crack the Sky are rock ‘n’ roll lifers; formed in Weirton, West Virginia in the early ‘70s by John Palumbo (vocals, keyboards) and Rick Witkowski (guitar, vocals), the band’s original line-up included guitarist Jim Griffiths, bassist Joe Macre, and drummer Joey D’Amico. The band released its self-titled debut album in 1975, the first LP released by songwriter/producer Terry Cashman’s independent Lifesong Records label. Crack the Sky received near-unanimous critical acclaim for its heady prog-rock sound, and was even proclaimed the “debut album of the year” by Rolling Stone magazine. In a pattern that would be all too familiar over the course of their lengthy career, distribution problems and promotional shortfalls prevented the album from really taking off.

The band released its sophomore effort, Animal Notes, a year later and ran into the same brick wall of widespread critical acclaim and commercial indifference. They toured heavily, opening for major league headliners like Kansas, Boston, Supertramp, and Yes, but received little or no radio airplay (even from ‘sympathetic’ FM stations) and, when their commercial fortunes failed to improve, Palumbo left the band to pursue a solo career. Recruiting singer Gary Lee Chappell, and with producer Rob Stevens subbing on keyboards, CTS released its third album, Safety In Numbers, in 1978. When it, too, underperformed the band decided to break up; Lifesong would release a live album later that year. Palumbo and Witkowski reunited in 1980 for the album White Music, and Crack the Sky has been performing and recording in one form or another ever since. 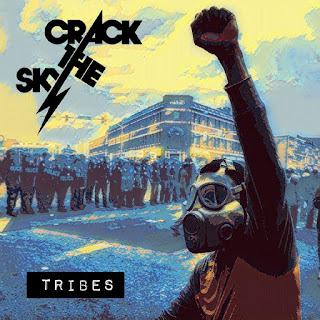 Crack the Sky got some positive press with the release of its 2018 studio effort Living In Reverse, the band doubling up a few months later with the compilation Crackology, which featured new recordings of old fan-favorite songs. Flash-forward a couple of years to the plague-ridden days of 2021 and CTS lives up to its name with the devastating Tribes, an album which sunders the heavens with sonic lightning bolts. I’ve always considered Crack the Sky to be more of a hard rock outfit with prog-rock tendencies, and it shows in the grooves of Tribes, with Witkowski leading a thunderclap band that includes original Skyster Joe D’Amico on drums as well as bassist Dave DeMarco, multi-instrumentalist Bobby Hird, and keyboardist Glenn Workman, the latter two men both 20-year CTS veterans. Together, they create a muscular musical canvas upon which Palumbo paints his colorful lyrics.

As a songwriter, Palumbo has always had a keen eye for his surroundings, but Tribes focuses that skill on America circa now, the album-opening title track the most succinct recap of where our society currently stands as you’ll ever hear. Above dark-hued instrumentation that settles into a menacing, slinky groove, Palumbo reveals the depth of divisiveness in our world with lyrics that are anything but reassuring. Palumbo’s vocals dance atop the lush soundtrack like a dervish on a pinhead, reinforcing the power of his words. D’Amico’s martial drumbeats open “Another Civil War,” Palumbo’s eerie vocals foreshadowing a dark future for the last American century as the band’s hybrid of pysch, prog, and goth sounds creates an intoxicating listening experience. The third of what is really a trilogy, “Dear Leaders” addresses the lack of empathy and anything even marginally resembling political courage in the U.S. in near-Biblical terms, the singer’s insightful lyrics matched by a gale-force storm of overwhelming instrumentation.

Palumbo resurrects an old song from his solo days for Tribes, “Blowing Up Detroit” masterfully capturing chaos in a bottle as the band rocks ferociously behind his vocals, the slashing guitars particularly stunning. Much of Tribes follows a similar blueprint to these first four, with Palumbo’s erudite, intelligent lyrics matched by snarling instrumentation that bares its fangs at every opportunity. Palumbo tosses off lines that lesser writers would kill for – “Turn on the TV and I feel like screaming, I close my eyes and hope I’m dreaming” or “I’m a stranger in a strange land, I tried to fit in a long time ago, and now it’s clear I don’t want to do that.” The songwriter waxes nostalgic for “Boom Boom” in a way that Springsteen forgot decades ago, the band strutting across the song like Godzilla stomping on Tokyo while “The Lost Boys” wonderfully captures the lingering alienation of the aging man-child with exotic rhythms that underline the agelessness of the theme.


Palumbo, Witkowski, and crew are extraordinarily talented musicians who, together, create a joyful noise, playing every bit as well as they did 45 years ago. Witkowski and Hird, in particular, are skilled and imaginative string-benders who play in service to the material without ego or showboating, but every member of CTS gets a chance to shine here. This isn’t ‘commercial’ music by any stretch of the imagination, but rather timeless incantations of rock ‘n’ roll that, the seeming topicality of the lyrics aside, sounds like it could have been recorded in 1975 or 2025, and it’s equally at home in either year. Old-school CTS fans will be overjoyed with Tribes, but any prog or classic rock fan will find a lot to like here. Grade: A (Carry On Music, released January 15th, 2021)

Buy the CD or LP from Amazon.com: Crack the Sky’s Tribes