Stuff I Like: Too Much Joy’s “Uncle Watson Wants To Think” 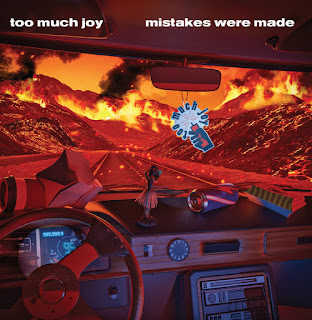 It would be an understatement to say that I’m overjoyed that one of my fave bands from the college rock era – the quirky, intelligent, indefatigable Too Much Joy – is returning in March with their first album in nearly a quarter-century. From indie rock records like 1987’s Green Eggs and Crack and the following year’s Son of Sam I Am (which includes the mirthful, insightful, classic tune “Clowns”) through their too-brief major label years, which yielded underachieving and overlooked albums like 1991’s Cereal Killers, 1992’s Mutiny, and the criminally-ignored …finally (1996), Too Much Joy never failed to deliver an entertaining musical experience. My long-lost interview with TMJ frontman Tim Quirk remains one of my favorite conversations with an artist but, since it was never published, I have no idea what we talked about…

Currently comprised of original band members Tim Quirk (vocals), Jay Blumenfield (guitar, vocals), Sandy Smallens (bass, vocals) and Tommy Vinton (drums) along with long-time member William Wittman (guitar, keyboards, vocals), Too Much Joy comes roaring back on March 19th, 2021 with Mistakes Were Made, and the band has released its first single from the album with an accompanying video. Needless to say, it sounds like they never left, with “Uncle Watson Wants To Think” displaying the same sort of bruised, wistful lyrics as their best songs along with an edgy pop-punk-drenched rock ‘n’ roll soundtrack…think of Weezer, but smarter and with balls. Of the song, the band writes that it “began life when critic/professor Gina Arnold shared a list of unused Raymond Chandler titles on Facebook and suggested her friends kill some pandemic lockdown time by writing stories to match.”

“Tim was struck by the title ‘Uncle Watson Wants to Think’, and asked if he could contribute a lyric, instead. He wrote the words quickly, while swimming laps in a swimming pool near his house: ‘I just saw Uncle Watson collapsed on a couch, and a little kid trying to sneak past him without disturbing the guy. The whole thing pretty much sprang to life fully formed, which is rare, for me. I could tell the guy was kind of a jerk, but I never like it when songs spend all their energy ridiculing someone else, so I tried to figure out what made him so sad and mean. Turns out Uncle Watson probably had his own Uncle Watson. Jay, Bill and Sandy worked up an appropriately melancholy arrangement for the tune, then Bill asked his pal Joan Osborrne to contribute some lady vocals to the mix, as we really needed to hear from the mother who brought this man into the house.’”

The video features singer/songwriter Joan Osborne on guest vocals and was directed and edited by Keegan Denery of 1596 Films. Says the band, “Jay had the idea for the video, which was assembled by young genius Keegan Denery after experimenting for several hundred hours with dozens of different images suggested by the band. Some looked uncannily real when they mouthed the song’s words, others were frightening failures. After a lot of trial and error, Keegan combined all the ones that worked into a seamless whole. Many of the characters are easter eggs for diehard Too Much Joy fans, based on old lyrics or PR mishaps.”

In the liner notes to the new album, the band writes “we weren’t really planning on making another record; this album only exists because 2020 sucked so goddamn much. Our humble hope is that, since it now exists, it can make whatever year you’re listening to it suck a little bit less.” Check out the video below and then get on over to Bandcamp to pre-order the brand-spankin’ new Too Much Joy album Mistakes Were Made. Tell ‘em that the Rev sent ya!

Buy the new CD: Too Much Joy’s Mistakes Were Made

Email ThisBlogThis!Share to TwitterShare to FacebookShare to Pinterest
Labels: #punkrock, Stuff I Like, Tim Quirk, Too Much Joy, video of the week
Location: Buffalo, Rust Belt, USA