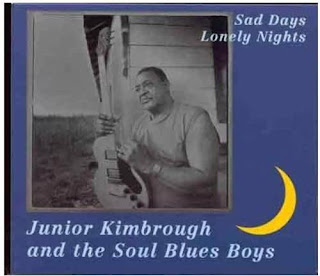 This February 2013 About.com “Blues Bites” column took a glance through the looking glass and into the past to 1995, checking out a handful of influential releases that helped make Fat Possum Records one of the premiere blue labels of the 1990s and into the 2000s.

Junior Kimbrough – Sad Days, Lonely Nights (Fat Possum Records, 1995)
As the story goes, Fat Possum Records was created out of the desire of blues lovers Matt Johnson and Peter Lee to capture Mississippi blues legend Junior Kimbrough on disc. Save for a few regional singles, Kimbrough’s enormous body of work was destined for obscurity. A chance meeting between the duo and Widespread Panic keyboardist Jo Jo Hermann brought the financial support the young label needed and Fat Possum was off and running. The label went ahead to release Kimbrough’s album debut, All Night Long, a critically-acclaimed, award-winning disc that placed the small Mississippi label on the blues map alongside longtime players like Chicago’s Alligator Records and Black Top Records.

Kimbrough’s second Fat Possum release, Sad Days, Lonely Nights, is an excellent showcase for the incredible talents of this legend. Kimbrough’s guitar playing is top notch, soaring through the eleven cuts presented here like a bird-of-prey in flight. The former moonshine-runner and juke-joint owner brings an air of realism to his work that can only come from a lifetime of the blues. Although Sad Days, Lonely Nights has its share of highlights, the entire album is a blues lover’s dream come true. Razor-sharp guitar riffs ricochet from speaker to speaker, Kimbrough’s understated vocals driving cuts like “Crawling King Snake”, “I’m Gonna Have To Leave Here”, or the traditional “Old Black Mattie” with heartfelt emotion and sincerity. This is the sort of stone cold, authentic blues that a lot of rockers attempt to emulate, but few ever truly capture a portion of the life that Kimbrough breathes into each performance. Grade: B+ 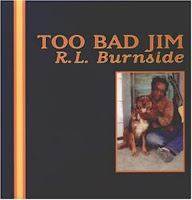 R.L. Burnside – Too Bad Jim (Fat Possum Records, 1995)
R.L. Burnside reminds me a lot of the great Muddy Waters. No uptown player, Burnside, eschewing the slick, highly-polished sound of those Chi-town bluesmen in favor of down-and-dirty Mississippi blues. Like Waters, Burnside has a gravel-lined growl of a voice, slurring lyrics into a mud-thick cocktail of passion and fire while the banging chords of the guitar keep a steady rhythm. Burnside’s Too Bad Jim was recorded live at Junior Kimbrough’s juke joint in Chulahoma, Mississippi, and is presented here, warts and all. The sound is hollow, often echoing Burnside’s throaty vocals and minimal guitar work. The resulting sound in not unlike what a lot of blues-based rock bands tried to achieve back in the late 1960s, cranking out lengthy jams in a large, cavernous hall for the tape player. On Too Bad Jim, the feel is entirely appropriate, imbuing the recordings with an ambiance that no studio engineer could ever hope to capture.

The songs performed by Burnside on Too Bad Jim, his second Fat Possum release, are rocking blues, Northern Mississippi style. The songs stand alone in the blues pantheon, unique compositions that are completely localized to a handful of rural Mississippi counties, featuring a musical and lyrical idiom shared by only a handful of artists. Cuts like “Shake ‘Em On Down”, “.44 Pistol”, and “Goin’ Down South” offer an original sound that is delivered in a traditional blues vein. They are highly-spirited works, full of vigor, imprinted by Burnside with a performance entirely his own. The scholars call it “Hill Country blues,” I simply call it invigorating. Grade: A 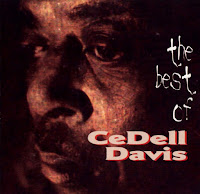 CeDell Davis – The Best of CeDell Davis (Fat Possum Records, 1995)
CeDell Davis, stricken by polio at the age of ten and left partially paralyzed, adapted to his disability by turning his guitar over and playing it left handed. He developed a fierce slide guitar style that owes a lot to the Robert Johnson school of blues, and cuts like “CeDell’s Boogie” and “Broke and Hungry” sound a lot like Davis is a mere one step ahead of the hellhounds on his trail. The Best Of CeDell Davis is a fine collection of traditional blues delivered with a great deal of verve and energy.

Davis’ slide playing resonates throughout this material, at times fluid and melodic, at others chaotic and discordant. His voice booms above the mix, joyful and vibrant, lyrics hurriedly shouted so as to get back to the matter at hand, picking the guitar. Songs like “Keep Your Mouth Closed Baby” or “Baby Don’t Do It” would sound more familiar to the casual blues listener than, say, Kimbrough’s complex guitar-based material or Burnside’s obscure styling, but this does nothing to diminish their power. Davis is a classic bluesman, forged in poverty and tempered by the music he creates. As such, just about anything he would care to play could be considered “the best” of CeDell Davis. Grade: A- 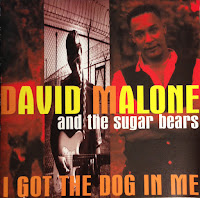 David Malone & the Sugar Bears – I Got the Dog In Me (Fat Possum Records, 1995)
By comparison, David Malone is a mere babe in the woods among this bunch. Twenty-five to thirty years younger than his Fat Possum labelmates, Malone brings a modern electric influence to the traditional blues styling of Kimbrough and Burnside. Malone is actually Kimbrough’s son, and his backing band, the Sugar Bears, includes his brother Kenny on drums and Burnside’s son Dwayne on bass. All are seasoned veterans, playing regularly at Kimbrough’s Mississippi juke-joint, Malone first joining his father on-stage at the tender age of six years old.

Malone’s I Got the Dog In Me successfully mixes the local, Northern Mississippi Hill Country blues style with elements of funk, rock, and 1960s-era R&B. Coming of age during the 1970s, the juke-joint was Malone’s birthright, the musical revolution carried on outside of Mississippi his bread and butter. Influenced by folks like the Isley Brothers, Teddy Pendergrass, and even Prince as well as his father, Malone blends styles so easily as to inspire awe. Whereas a cut like the funky “Do the Romp” or the soulful “I Got the Dog In Me” would easily fit into any urban contemporary radio format, the G.Q. smooth “You’re Touching Me the Wrong Way” could sit easily alongside similar roots-oriented artists like Robert Cray or Bonnie Raitt on the charts.

It’s the blues that Malone keeps coming back, to, however, his bloodline seemingly preordaining his inevitable musical direction. Malone has earned his blues honestly, though. Raised in extreme poverty in rural Mississippi, Malone credits a long five year stint in his home state’s brutal Parchman prison for turning him away from drugs and saving his life. The result is an honesty and sincerity that shine through songs like “Raunchy Stuff”, “Home Alone”, and “Trying To Make It Over”. Contrary to musical naysayers, who claim that young African-Americans are moving away from the blues, I Got the Dog In Me is proof that as long as men and women are forced to live the blues, they’ll be inspired to sing the blues. Grade: B-