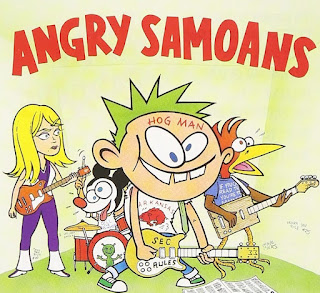 Reviews originally published as a “Buzz Kuts” column, Alt.Culture.Guide™, May 1999

ANGRY SAMOANS
The 90s Suck & So Do You
Metal Mike Saunders is back with another Angry Samoans album, a too-brief eight-song collection of fast ‘n’ furious punk tuneage guaranteed to rock the paint off your walls and destroy your brain cells even while making you mosh in your parent’s living room. Metal Mike’s songs have always had a certain innocence of attitude about them, even when he’s being nasty – think of your typical Adam Sandler movie and you’re in the right ballpark. The 90s Suck & So Do You offers up some unpolished gems among its songs, like the love affair described by “Suzy’s A Loser”, the romantic fantasy world of “In and Out of Love”, or the hilarious commentary of “Letter From Uncle Sam”. Although there’s nothing here that’ll change the alignment of the stars, and Saunders may never be mistaken for a literary giant, Metal Mike nevertheless has the right outlook and attitude to spare. The 90s Suck & So Do You is a pleasant enough diversion, and sometimes that’s exactly enough. (Triple X Records)

CHOKING VICTIM
No Gods / No Managers
There’s a great punk zine called Profane Existence that has as its slogan “making punk a threat again.” That’s the first thing that came to mind when listening to Choking Victim’s No Gods/No Managers. Following a lean, mean hardcore punk ethic with just a little Clash-inspired ska thrown in for good measure, Choking Victim offers up an anarchistic view of the world. Although tracks like “Fuck America” or the hilarious “Five-Finger Discount” won’t garner much airplay, they have won over this cranky old anti-authoritarian fart. If you want no-frills punk with a bloody cutting edge that is as threatening as it is entertaining, then No Gods/No Managers is for you. If you’d rather not be challenged, musically or intellectually, climb back beneath the sheets. (Hellcat Records)

FULL
Hotdogwater Cocktail
You can’t find fault with a group of unabashed punkers like Full for trying to breath new life into a crappy old song like America’s “Sister Golden Hair”. The way that they play it, fast and loud without a shred of wistful singer/songwriter melancholy, you’d never be able to tell that it was once a sickening FM radio staple. Although they attack America’s hit song with tongues placed firmly in cheek, the rest of Hotdogwater Cocktail is no joke. A fine indie effort, Full rolls their way through a rock solid set of guitar-driven punk tunes. Aside from the aforementioned cover, other highlights of Hotdogwater Cocktail include the funny, taunting “Music Critics”, the soulful “Please Forgive Me”, and “Pepsled”, with its odd syncopation. Not too serious, not too goofy, the trio Full strikes a fair punk rock balance with the imaginatively named Hotdogwater Cocktail. (Acme Entertainment) 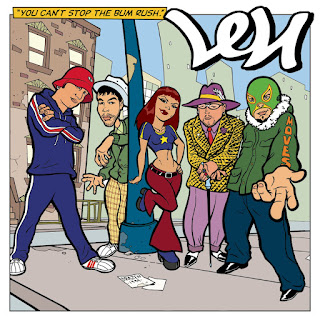 LEN
You Can’t Stop The Bum Rush!
Proving that you don’t necessarily have to live in the hood to cop a deep groove, Canada’s Len shine bright and funky with You Can’t Stop The Bum Rush! Mixing old-school rhymes with contemporary hip-hop rhythms, pop culture influences and electronic manipulations, Len have cranked out a solid set of songs. The Len crew – The Burger Pimp, his sister Sharon, D. Rock, Planet Pea, DJ Moves, and Drunkness Monster – mix it up here, sliding from techno-grooves with digital vocals to straight-forward pop/rock numbers with ease. Guest stars include Biz Markie, Kurtis Blow, and C.C. DeVille of the Poison Clan, making You Can’t Stop The Bum Rush! a real old-school reunion. Primarily mixed by the Dust Brothers’ John King, Len’s debut is an impressive slice of sheer funkadelic mind candy. (Work/Epic Records)

SPEAK NO EVIL
Speak No Evil
In case none of you noticed, there’s a new hard rock/heavy metal revolution brewing here in the states. Although the first wave is made up of a bunch of hip-hopping hard rock wankers like Limp Bizkit or the deftones, the second wave is beginning to crest with a return to stronger, more traditional heavy metal thunder. Speak No Evil are one of the bands that will be surfing that second wave, their self-titled debut album kicking out the jams with a relish. Vocalist Curtis Skelton possesses a classic metal-slinger’s wail, capable of out-shouting highly-amped guitars even while caressing a lyric for all it’s worth. Drawing heavy on influences that include Led Zeppelin, AC/DC, and Metallica, Speak No Evil nonetheless forge their own distinctive identity with this monster debut. (Universal Records) STRETCH ARM STRONG
Rituals of Life
With a sound that is heavily reminiscent of early Metallica, Stretch Arm Strong thrash and burn their way through a truly heavy set of songs on Rituals of Life. The twin guitar attack of axemen David Sease and Scott Dempsey underline singer Chris McLane’s powerful vocals. Although the band brings a certain spiritual and intellectual fervor to their lyrics, the strongest moment on Rituals of Life is “To A Friend”, a heartfelt tribute to a friend paralyzed in an auto accident. It’s here that their true talents and emotions shine through, making for some potent rock ‘n’ roll indeed. (Solid State Records)

VARIOUS ARTISTS
THis Is Solid stATe Vol. One
Much like Tooth & Nail Records has created a cottage industry out of producing Christian rock records that span a stylistic range from alt-rock to heavy metal, fellow Seattle label Solid State Records is developing their reputation as the home of the heaviest of the heavy. This sixteen-track sampler is a fair indicator of Solid State’s musical philosophy: you won’t find a wimpy band or song among the label’s artists represented here. From the muscular bass-heavy heavy metal of Living Sacrifice and the thinking-man’s rock of Stretch Arm Strong to the “take no prisoners” techno-thrash of Warlord or the sonic overkill of Training For Utopia, THis Is Solid stATe Vol. One is the sort of album that will drive your parents to distraction. Although many of the bands bring a Christian or otherwise spiritual perspective to their songs, it never gets in the way of bringing down the roof. Offering previously unreleased cuts by Living Sacrifice, Stretch Arm Strong, Embodyment, and Warlord, THis Is Solid stATe Vol. One presents hard rock with brains and balls. (Solid State Records)
Posted by Rev. Keith A. Gordon at Friday, January 06, 2023