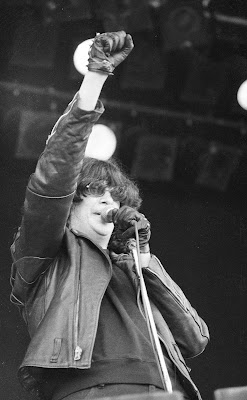 Who could have imagined that, thirty years after their demise, the Beatles would again rule the pop charts as they did at the end of the year? Sure, a lot of old geezers bought the greatest hits compilation Beatles 1 (Capitol Records), but a younger generation – one weaned on pop music – has embraced the Fab Four as another boy band. If the young ‘uns want to hear some real pop gems they should look no further than All Things Must Pass (Capitol Records). George Harrison was an integral part of the Beatles’ overall sound, his skilled lead and slide guitar work creating strong roots for Lennon and McCarthy to build their songs upon. Harrison’s classic 1970 solo album, reissued as a two-CD boxed set, includes bonus tracks and a booklet with liner notes, lyrics and photos. Harrison’s songwriting prowess, largely untapped by the Beatles, led to hits from All Things Must Pass in “My Sweet Lord” and “What Is Life.” Other stand out tracks, such as the lush “Beware of Darkness” or the lovely “If Not For You” are memorable songs as well, contributing to Harrison’s success as the first solo star of the famed Liverpool foursome.

There’s been a lot of hype surrounding the self-titled debut from the Black Rebel Motorcycle Club (Virgin Records), and for good reason – the album kicks tail! Taking their name from Marlon Brando’s gang in the film The Wild Ones, B.R.M.C. offer a vintage rock sound that’s long on fuzz, feedback and obscured vocals. Cuts like “Love Burns” or “Whatever Happened To My Rock ‘N’ Roll” sizzle and burn like an open flame, drawing comparisons to English bands such as the Jesus & Mary Chain or Stone Roses. To these ears B.R.M.C. remind me instead of the sort of garage bands found on Lenny Kaye’s Nuggets compilation. There’s the same passion, the amateurish raw talent and the reckless abandon that often creates great music. The lush, wall-of-sound production provided Black Rebel Motorcycle Club overwhelms the senses, the album a multi-layered and finely textured mixture of raging guitars, primal rhythms and oblique lyrics. A solid debut disc that will peel the paint from your walls, Black Rebel Motorcycle Club is a band worth keeping an eye on.

Long before MTV or VH-1 or network specials by Garth and Britney, music on television was represented by shows like American Bandstand and Hullabaloo, which offered a variety of musical styles performed in a studio setting. The recent release of Hullabaloo, Volume 1-4 on video and DVD (MPI Home Video) is a godsend for music lovers. The digitally remastered DVD volume includes seven complete shows from 1965 and 1966, hosted by folks like Beatles manager Brian Epstein, actor Michael Landon and singers Trini Lopez, Gary Lewis and Sammy Davis Jr. The musical performances rise above the often absurd studio backdrop, with talents such as the Sir Douglas Quartet, the Byrds, Johnny Rivers, the Yardbirds, Chuck Berry, Sonny & Cher and almost two dozen others delivering their own unique brand of music. There are almost four hours of musical performances here and whether in black & white or NBC’s glorious Technicolor, Hullabaloo, Volume 1-4 provides a glimpse through the looking glass to a time past but not forgotten.

Two men died over Easter weekend, one well known in the music world and the other more of a “behind-the-scenes” kind of guy. Both musicians were approximately the same age and although their careers varied greatly, both shared a love of music that defined them as artists and individuals. Joey Ramone was one of the true grandfathers of punk music, known the world over as lead singer and songwriter for the Ramones. A giant in pop culture, Ramone fronted his band for almost a quarter-century, their live shows legendary for their speed and fury. I can’t imagine punk bands like Green Day, Rancid, the Queers, Boris the Sprinkler, and others existing without the humor and simple honesty found in the music of the Ramones.

Argyle Bell was not as well known, but was no less well loved in his small world. A fixture on the Nashville music scene for almost twenty years, Bell was a talented musician and producer and an early supporter of many artists who would go onto varying degrees of success. Bell could always be found in the bars and honky tonks that serve as both a training ground and final stop for country and rock talent in the town, offering advice and support. He organized several star-studded charity tributes to musical idols such as Gram Parsons and he traveled often to Ireland and was instrumental in bringing Celtic music to Nashville audiences. His life touched many in the Music City and he could count artists such as John Prine, Vince Gill, and bluegrass picker Peter Rowan among his friends. In a cultural era of plastic pop stars and corporate modern rock, both men were true originals…and both will be missed. Rest in peace, guys. (View From The Hill, April 2001)
Posted by Rev. Keith A. Gordon at Friday, January 20, 2023