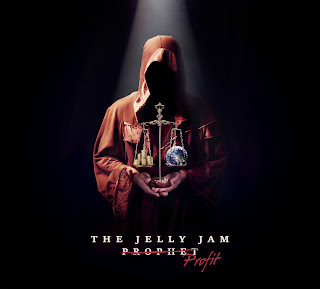 A prog-rock supergroup of sorts, the Jelly Jam has been a longtime side project for the talented Ty Tabor of King’s X and his equally talented friends John Myung (Dream Theater) and Rod Morgenstein (Dixie Dregs, Winger). The trio released its critically-acclaimed, self-titled debut album in 2002 and followed it with The Jelly Jam 2 in 2004. After a period of time during which the musicians were focused on their day jobs, the Jelly Jam resurfaced after a lengthy hiatus with 2011’s Shall We Descend.

On May 27th, 2016 Music Theories Recordings, an imprint of the Mascot Label Group, will release the Jelly Jam’s fourth album, Profit. For the first time in the band’s fourteen-year existence, the trio will launch a globe-spanning tour to support the new album. Profit is a conceptual album that follows the sojourn of The Prophet, whose mission is to save the world and open the eyes of those who “will not see.” In a press release for Profit, Tabor describes the album’s concept as “a fight between progress and jobs at all cost and not thinking about any future payment that are going to have to be made.”

Tabor says that, “each Jelly Jam album is very different and we are most definitely discovering new ground. The first album was pretty straight ahead in its nature and vibe. The second album was more about the songwriting and had a very different feel. By the time we got to Shall We Descend, we were all at different musical places. It had more of a darker edge to it, but we finally realized that we had tapped in to something that was unique to us. There really is no Jelly Jam ‘sound.’ In order to make Profit the strongest album, we recorded a lot of excess music and chose songs that work together towards the general story idea. Musically and sonically we started experimenting a lot further than we had before. It stands on its own as an album beginning to end with a purpose. It’s not just a bunch of songs thrown together. It’s an entire journey through a story.”

The accomplishments of the Jelly Jam’s three musicians are impressive. As a founding member of King’s X, Tabor wrote the band’s three chart hits – “It’s Love,” “Black Flag,” and “Dogman” – and has toured with folks like Iron Maiden, AC/DC, and Cheap Trick, among others. Tabor produced all four of the Jelly Jam’s albums as well as his own solo releases and several King’s X albums. Myung is a respected innovator on bass guitar and a founding member of Dream Theater, perhaps the most successful and influential prog-metal bands of all time. Drummer Morgenstein was timekeeper for the Dixie Dregs, an influential and ground-breaking 1970s-era outfit that also included guitarist Steve Morse (Deep Purple). He’d go on to play with Winger during that band’s gravy years, and has also performed and recorded with Platypus and the Steve Morse Band and is currently an Associate Professor with the Berklee College of Music in Boston.

As stated above, the Jelly Jam will soon be announcing dates for a greatly anticipated full tour in support of Profit. Tabor explains, “This album is without a doubt the most special moment the band has ever had together and we must make touring real this year to support this album.” Get a taste of the new album below...