Pride and Joy: The Story of Alligator Records on Blu-ray 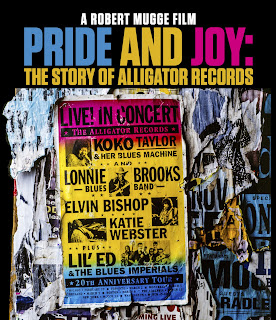 Alligator Records has arguably done more to advance the cause of the blues than any other company. Formed in 1971 by blues fan Bruce Iglauer, who was working as a shipping clerk for the legendary Delmark Records label at the time, the first album released by Alligator Records was the debut by Hound Dog Taylor and the HouseRockers. Alligator subsequently released ground-breaking and career-making albums by legends like Koko Taylor, Albert Collins, Lonnie Brooks, Son Seals, and others throughout the 1970s and ‘80s. More recently, Alligator has discovered and developed young blues talents like Selwyn Birchwood, Jarekus Singleton, and Michael “Iron Man” Burks.

Originally released in 1992, Pride and Joy: The Story of Alligator Records is part documentary and part concert film. Pride and Joy was created by respected filmmaker Robert Mugge, who collaborated with music writer Robert Palmer the year before on the influential and essential documentary Deep Blues, which introduced fans to talented artists like R.L. Burnside and Junior Kimbrough. The film offers musical highlights from one of the four-hour-plus concerts along the Alligator Records 20th Anniversary Tour, including performances by Lonnie Brooks, Lil’ Ed & the Blues Imperials, Koko Taylor, Elvin Bishop, and others. The film also includes profiles of key performers and label staff members as well as a look behind the scene at Alligator’s Chicago offices.

On April 22nd, 2016 MVD Entertainment Group will release Pride and Joy: The Story of Alligator Records on Blu-ray DVD for the first time. The movie has been newly transferred to HD from the original 16mm film and stereo audio masters and carefully restored by the director Mugge. Also included on the Blu-ray are ten bonus songs taken from Alligator’s original 1992 tour and soundtrack CD, as well as Mugge’s new ‘making of’ video, Alligator Tales. Altogether, Pride and Joy provides an in-depth look at one of longest-running independent labels in America and the artists who contributed to Alligator’s success and legacy.

Buy the Blu-ray from Amazon.com: Pride and Joy: The Story of Alligator Records
Posted by Rev. Keith A. Gordon at Thursday, March 24, 2016