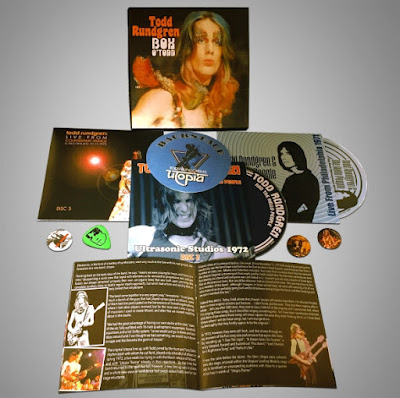 With so many new album releases every month, it’s easy to overlook something specific that may scratch a musical itch that’s been running like drunken chiggers across your cerebellum. One such release that may have flown under your well-tuned rock ‘n’ roll radar is Box O’Todd, a three-disc, limited edition live box set from legendary singer, songwriter, and multi-instrumentalist Todd Rundgren released on March 18th, 2016 by Purple Pyramid, a subsidiary of Cleopatra Records.

Rundgren, of course, has left his mark on rock music as both an artist and producer. After making his bones as an integral member of the bands Nazz and Runt (really a Todd solo vehicle), Rundgren launched his solo career in earnest in 1971 with the classic double-album Something/Anything, on which he played all the instruments on three sides of the disc. Rundgren would subsequently release classic albums like Todd, Faithful, and Hermit of Mink Hollow, finding moderate commercial success and the occasional hit single; his side band, Utopia, provided an outlet for Rundgren’s more outré instrumental compositions. As a producer, Rundgren has worked on classic albums by artists like Meatloaf, the New York Dolls, and Grand Funk Railroad as well as recordings by XTC, Hall & Oates, Sparks, and the Tubes, among others, and he continues to tour and record to this day. 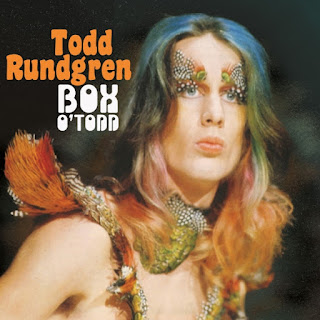 Box O’Todd features previously unreleased (but frequently bootlegged) live in-studio performances which were all originally broadcast on FM radio at the time. Disc one features a 1971 performance by Rundgren, backed by the Hello People, which was originally broadcast on WMMR-FM in Philadelphia. The Hello People were an odd late 1970s/early ‘80s band that mixed mime and music, and they served as Rundgren’s touring band for a while (Todd also produced their 1975 LP Bricks). The performance offers a mix of songs by Rundgren and the Hello People.

Disc two of Box O’Todd captures a 1972 performance by Rundgren and the Hello People, originally broadcast from the UltraSonic Studios on WLIR-FM radio in Long Island, New York. The third disc of the box features a 1973 performance in Cincinnati which was broadcast by WKRQ-FM and features an early performance by Rundgren with his band Utopia. Box O’Todd also comes with a 20-page booklet featuring liner notes by esteemed writer Dave Thompson (a buddy of mine), rare color photos, a signature guitar pick, three collectible pins, and a backstage pass – goodies that will certainly appeal to the hardcore Todd fan – as will three discs of great live music.