Video of the Week: Blackfoot Gypsies’ Under My Skin 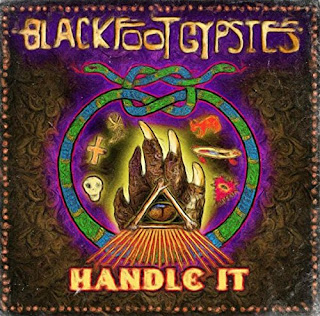 Blackfoot Gypsies hail from Nashville, which is an absolutely horrible place to be in a rock ‘n’ roll gang unless you’re willing to King’s wax Jann Wenner’s limo every weekend (and on holidays). The east-and-west-coast-based major labels want nothin’ to do with your band unless you sound exactly like everybody else on their roster, which has been hand-picked for conformity and exploitation by some coke-snorting empty suit with a six-figure expense account.

Even when a record label does take a chance on a band from the Music City, they usually don’t know how to “sell them,” which makes one wonder how they got their job in the first place ‘cause, well, selling records is really their only job…a task at which they fail as often as not (just ask Jason & the Scorchers, Webb Wilder, the Features, et al…). Instead, Blackfoot Gypsies are signed to local label Plowboy Records, co-founded by the legendary Cheetah Chrome, a man who knows a thing or two about both major label hijinx and making a joyous noise.

Handle It is the band’s second full-length album, from which our video of the week comes from. “Under My Skin” has nearly everything you could want in a visual representation of the song – a scantily-clad, pissed-off voodoo priestess laying some serious black cat moan down on the band with her hoodoo witchery; a throbbing Delta blues mojo sound combined with eerie, hollowed-out production; wailing harmonica; and wiry, razor-edged fretwork that helps bring those long-gone Mississippi ghosts back to life.

The Gypsies lead singer looks like a cross between Buddy Holly and Rivers Cuomo, the harp player resembles a long lost Neville Brother, and the drummer looks like he should be behind the kit playing for some sludge-metal outfit like Mastodon. As for the bassist, well…he’s the bassist, the band’s pretty boy and the holy keeper of a heavy bottom end. Handle It is a pretty spiffy LP, though, the band cranking out an inspired mix of psychedelic blues, asphalt-munching hard rock, and roots-bound country twang that proves that these guys have visited Tootsie’s Orchid Lounge a time or two. Captured on tape, Blackfoot Gypsies evince a fierce groove that proves their status as young soul rebels. Don’t believe me? Check out the video for “Under My Skin” and make up your own damn mind...

Email ThisBlogThis!Share to TwitterShare to FacebookShare to Pinterest
Labels: #realrocknroll, Blackfoot Gypsies, Other Side of Nashville, video of the week
Location: Music City, USA