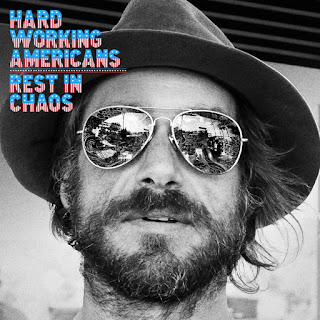 Everybody’s favorite Americana supergroup – Hard Working Americans – has announced the band’s upcoming second studio effort. Titled Rest In Chaos, the album will be released on May 13th, 2016 by Melvin Records and Thirty Tigers. The thirteen-track album offers a cover of Guy Clark’s “The High Price of Inspiration,” with Clark himself sitting in on guitar, along with a dozen original songs written by the band while touring, the material recorded live in six different studios.

The Hard Working Americans’ self-titled debut album was released in early 2014; a covers collection of blue collar blues, the album included songs by such talented scribes as Will Kimbrough and Tommy Womack, Kevin Gordon, Hayes Carll, and Kevn Kinney (Drivin’ ‘n’ Cryin’), among others. The band followed up that initial release later that year with The First Waltz, a two-disc CD/DVD live set that included a new studio track recorded with Roseanne Cash. Rest In Chaos is the band’s first album to take full advantage of Snider’s immense songwriting skills. Living up to their name, the band will hit the road after the album’s release and although they haven’t released tour dates yet, we do have a track list for Rest In Chaos, provided below.