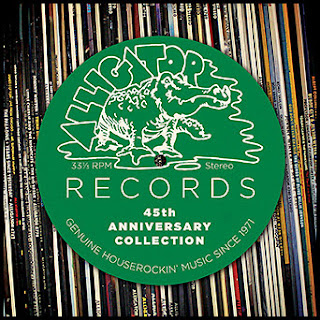 It’s a rough world out there for an independent record company, but the esteemed blues label Alligator Records has beat the odds and is celebrating its 45th anniversary this year. Apart from the great music that Alligator has scheduled for 2016 release, the label is sharing its good fortune with its fans with the June 10th, 2016 release of the Alligator Records 45th Anniversary Collection. A budget-priced two-disc set offering over 148 rockin’ minutes of music from artists across the label’s storied history, the Alligator Records 45th Anniversary Collection features career-defining performances by artists both old and new, including Selwyn Birchwood, Shemekia Copeland, Curtis Salgado, Delbert McClinton, Anders Osborne, Joe Louis Walker, and many others.

In those early years, Iglauer ran the label out of his small Chicago apartment, and each LP he released had to finance the next album, leading to a sporadic release schedule. Alligator’s early album releases, though, by legends like Big Walter Horton, Son Seals, and Fenton Robinson, helped establish blues music in the 1970s. Iglauer signed the great Koko Taylor in 1975, and soon attracted artists like Albert Collins, Roy Buchanan, and Johnny Winter.

Four-and-a-half decades later, Alligator Records is the largest independent blues label in the world, and it has been honored with 41 Grammy™ nominations, and three awards for its albums. The label and artists like James Cotton, Koko Taylor, Luther Allison, Saffire – The Uppity Blues Women, and Michael “Iron Man” Burks, among others, have been honored with over 100 Blues Music Awards and over 70 Living Blues magazine awards.

While Iglauer and his dedicated staff of 15 employees (many of which have spent over 20 years with the label) continue to live up to the label’s slogan, releasing “Genuine Houserockin’ Music,” they’re not resting on their laurels. Iglauer, in a press release for Alligator Records 45th Anniversary Collection, says “Alligator should be the label that's exposing the next generation of blues artists and bringing their music to the next generation of blues fans. I want the future of the blues and the future of Alligator Records to be one and the same. I want to keep bringing blues and roots music to new fans and getting them as excited about the music as I am.”
Posted by Rev. Keith A. Gordon at Wednesday, April 13, 2016