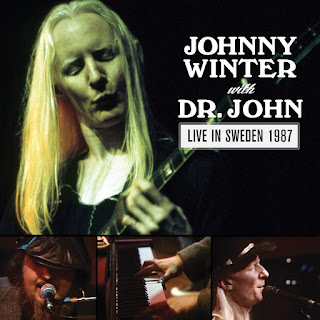 The reputation of beloved blues-rock guitarist Johnny Winter has only grown since his death in July 2014. Perhaps the most-bootlegged of blues artists (the classic bluesmen enjoyed the prime of their careers years before taping became prevalent), everything from Winter’s earliest demo recordings to an abundance of live performances has found its way to fans, traders, and collectors, authorized or no.

Winter’s legit back catalog is nothing to sneeze at – a dozen and a half studio LPs, another ten or so live discs, and then there’s the dozen Live Bootleg Series albums the guitarist compiled for Friday Music – over 40 albums featuring the legendary bluesman. Include an equal number of obscure releases of ill repute, and there’s certainly a wealth of Winter available for young blues fans to discover.


Toss Live In Sweden 1987 on top of the teetering stack o’ Winter wax, not only because it’s historically important, but because it’s just a hell of a lot of fun! Documenting a performance on Swedish television with his ol’ buddy Dr. John (a/k/a Mac Rebennack), Live In Sweden 1987 features Winter fronting a classic power trio comprised of bassist Jon Paris and drummer Tom Compton, the line-up that would subsequently record The Winter of ’88 for MCA Records. The performance is relevant as it showcases Winter in-between contracts, having just left Alligator Records, for whom he recorded a trio of acclaimed and dynamic albums, and before he returned to the majors (albeit briefly...).

Winter comes roaring out of the gate like a prize thoroughbred with “Sound The Bell,” from his middle Alligator release, 1985’s Serious Business. Mangling his fretboard like nobody’s business, Winter chomps up the track at a fast pace as his rhythm section tries to keep up, his wiry solos coiled like concertina wire as he turns a three-minute romp into a seven-plus minute manic jam. Things cool off a bit for “Don’t Take Advantage Of Me,” a funky rocker taken from 1984’s Guitar Slinger album. Atop a heavy fatback groove, Winter lays down some wicked licks while Paris nicks a classic bass riff from Cream’s Jack Bruce to play with, and Compton just beats the tar out of his kit, crashing and banging through the performance.

The Willie Dixon-penned gem “Love Life & Money,” from Third Degree, is a bluesy duet between Winter and Dr. John, the two swapping off gruff, groaning vocals on a lyrical tale of woe, the song’s noisy instrumentation punctuated by Winter’s mourning guitar playing and Rebennack’s tearful, honky-tonk keys. Winter closes out the show with his traditional performance of the Rolling Stones’ “Jumpin’ Jack Flash,” a song tailor-made for Winter’s trademark style of guitar raunch. Winter and the gang don’t disappoint, ripping through the riff-heavy tune like a pride of hungry lions, with cascading rhythms, screaming guitar, and tidal waves of piano accompanying Winter’s best growling, Howlin’ Wolf vocals.


Running a mere seven songs and around an hour in length, Live In Sweden 1987 will leave the listener satisfied, but wanting much more. Winter’s performance throughout the album is stunning, his guitar solos sharp and joyful – his high-flying romp during “Love Life & Money” is particularly moving, full of emotion and imagination. Dr. John’s contributions to the show can’t be understated, his immense talents and particular style of jazz-flecked Cajun blues offering a fine counterpoint to Winter’s soulful, Texas-bred strain of the music.

Performance aside, Live In Sweden 1987 is important for Johnny Winter fans because there’s just not a lot of late ‘80s era live Winter recordings available. Aside from an antique VHS videotape, I couldn’t find any previous release of this material, either semi-legit or bootleg, which means that the good folks at MVD Audio have rescued a true JW treasure from obscurity. Better yet, the performance has been released on CD, DVD, and vinyl, covering all the bases for the rapid faithful. On any given night, Winter could be the best bluesman on the planet, and Live In Sweden 1987 captures an electrifying night that explains what all the hype surrounding Winter was about to begin with. Grade: A- (MVD Audio, released April 22, 2016)