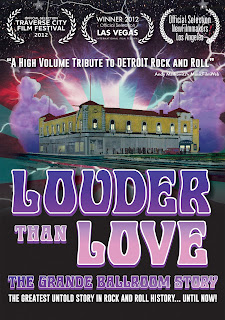 It was one of a handful of legendary American music venues, and the epicenter of the high-octane Detroit rock ‘n’ roll scene. Originally opened in 1928 as a popular dance hall, the historic Grande Ballroom was bought in 1966 by local high school teacher and radio DJ Russ Gibbs, who envisioned a venue similar to the Fillmore in San Francisco. Working with like-minded local counterculture figures John Sinclair (poet, musician, and MC5 manager) and High “Jeep” Holland (producer and manager of local bands), they booked a veritable “who’s who” of classic rock and blues artists to perform at the venue between 1966 and 1972, including Eric Clapton and Cream, Led Zeppelin, Janis Joplin, Howlin’ Wolf, the Who, and the Grateful Dead. Motor City rock legends the MC5 were frequent performers at the Grande, as were local rockers like Iggy & the Stooges, SRC, Catfish, Frost, Ted Nugent, and Savage Grace, among others.

On June 10th, 2016 our friends at Music Video Distributors will release Louder Than Love - The Grande Ballroom Story on DVD. Produced and directed by Tony D’Annunzio, the award-winning documentary film has enjoyed boffo screenings at nearly three dozen different film festivals around the world since its April 2012 debut to sold-out audiences in Detroit, including the Nashville Film Festival, Australia DocWeek, and the CBGB/NYC Music & Film festival. Filmmaker Michael Moore – a Flint, Michigan native – personally chose Louder Than Love for his Traverse City Film Festival, describing the movie as “an amazing look back at the talent and creative culture produced in this state.”

“The Grande Ballroom era is potentially the greatest untold story in rock and roll history,’ says director D’Annunzio, a Detroit native, in a press release for the DVD. “With everything Detroit has been through in the last several decades, I wanted to let folks know that aside from the automobile industry, the city has some amazing musical history which helped shape American pop culture.” The filmmaker collected more than 75 hours of interviews with both local and international musicians who performed at the Grande Ballroom, including B.B. King, Alice Cooper, Scott Morgan (The Rationals), Wayne Kramer (The MC5), Dick Wagner (Frost), Ted Nugent, and James Williamson (The Stooges), among others.

D’Annunzio also gathered over 500 never-before-seen archival photos taken by professional photographers and fans of Grande Ballroom performers like the Who, Albert King, Jeff Beck Group, Iron Butterfly, the MC5, Traffic, and others. “We have incredible 8mm film of The Who performing ‘Tommy’ for the first time, including an audio recording by Pete Townsend explaining ‘Tommy’ to The Grande audience. Both have never been seen or heard in any documentary,” D’Annunzio notes. Showcasing the legacy of of one of the most influential music venues in rock ‘n’ roll history, you’re going to want to check out Louder Than Love - The Grande Ballroom Story!

Buy the DVD from Amazon.com