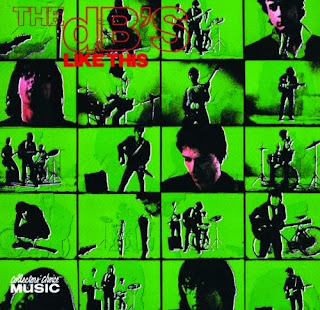 Formed in 1978 in North Carolina by guitarist/songwriter Chris Stamey, bassist Gene Holder, and drummer Will Rigby, the dB’s stood at the forefront of the late 1970s/early ‘80s Piedmont “jangle-pop” movement that included Mitch Easter’s fondly-remembered band Let’s Active and producer and musician Don Dixon’s various projects. Peter Holsapple, a former bandmate of Stamey’s, hooked up with the trio later the same year and the band moved to NYC in search of fame and fortune.

Sadly, they couldn’t get a stateside record deal, instead signing with British imprint Albion for the release of two excellent pop/rock efforts: 1981’s Stands For Decibels and 1982’s Repercussion. Although both albums were critically acclaimed, they were ignored by the masses – much like Big Star’s first two albums, an obvious touchstone for the dB’s sound – and Stamey left the dB’s in ’83 to pursue a solo career.

With Holsapple fronting the band, the three remaining members recorded Like This in 1984. Influenced, perhaps, as much by the Byrds and Buffalo Springfield as by the British Invasion, the album added more of Holsapple and Rigby’s roots-rock sound to the pop formula, moving beyond Stamey’s art-rock maneuvers to deliver an ingratiating collection of songs. It’s no stretch of the imagination to say that Like This paved the way for folks like Matthew Sweet and Velvet Crush to follow, influencing contemporaries like R.E.M. and the Fleshtones as well.

Like This opens with the charming “Love Is For Lovers,” a spry song with great vocal harmonies and hook large enough to reel in any listener, a song prime for covering by the right artist. “Love Is For Lovers” sets the table for the feast to follow, songs like the beautifully bittersweet “Lonely Is (As Lonely Does),” which matches lofty vocals with lush, intricate instrumentation and mournful lyrics.

“Amplifier,” a tragic, dark-hued tale of love, loss and suicide sports clever lyrical gymnastics supported by a solid rhythm and snakelike guitar licks to pierce the wall of sound. “A Spy In The House Of Love” displays the boy’s Southern funk side, with a loping rhythm and Holsapple’s soulful vocals while the fierce, rocking “Rendezvous” features Holsapple’s nifty fretwork and some of Rigby’s best drumming, the rhythms hitting your ears like a tidal wave.

“White Train” documents a meeting with the devil, a story of sin and salvation and a heaven-bound soul with a twangy rockabilly soundtrack and fine harmonies from the trio. The Collectors’ Choice Music CD reissue of Like This offers bonus tracks in the form of “Darby Hall,” a Gothic tale with ethereal vocals and delicate instrumentation, and a largely disposable and unnecessary remix of “A Spy In The House Of Love” that robs the song of its original energy.

As written by history, the dB’s chose to release Like This and jump into a tour opening for R.E.M. rather than wait for their label, Bearsville, to sign a distribution deal with Warner Music. The label folded shortly after the album’s release, leaving the band high and dry and dooming the album to commercial obscurity.

Although they would later sign a deal with R.E.M.’s label, IRS Records, for their 1987 release The Sound Of Music, the dB’s would never get over their “cult band” status and broke up after their fourth album. With Like This finally restored on compact disc, pop/rock fans can rediscover this long-lost musical bridge between Big Star’s groundbreaking early 1970s albums and ‘90s-era popsters like Matthew Sweet, Jellyfish and the Posies. Enjoy! (Alt.Culture.Guide, 2006)

Buy the CD from Amazon.com: The dB's Like This