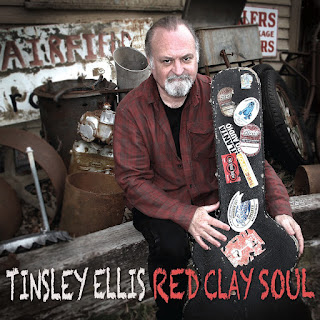 Over the past four decades, bluesman Tinsley Ellis has performed in every state, as well as Canada, Europe, Russia, Australia, and South America, travelling over a million miles and acting as a true ambassador of the blues. For the Georgia-born guitarist, there’s no place like home, though, and with his new album, Red Clay Soul, Ellis will pay tribute to the musical tradition of the Peach State. “Georgia is where the blues has got soul,” Ellis says in a press release for the new album. “From the gospel inspired Ray Charles, to the R&B of James Brown and Otis Redding, to the rock and roll of Little Richard, to the blues rock of the Allman Brothers Band, all these acts have one thing in common. They all have the sound of Georgia and down here we call that sound red clay soul.”

Ellis welcomed a number of guests into the studio for the making of Red Clay Soul, including Oliver Wood from the Wood Brothers, and keyboardist/producer Kevin McKendree. Says Ellis, “Kevin is someone I have recorded with on every studio album I’ve done since Fire It Up, which was produced by Tom Dowd. On this one, he co-produced with me for the first time, and it was his idea to record live in the studio. That insight and vision yielded an album that is different and more exciting than the others we've done in his Nashville-based studio.”

Oliver Wood was a member of Ellis’ band in the early 1980s, and the two artists wrote “Givin’ You Up” a decade ago, the song finally seeing the light of day on Red Clay Soul with Wood providing guitar and vocals. Among the other nine tracks on the album are the bluesy, raucous “All I Think About,” which offers up plenty of Ellis’ stinging guitar and some tasty piano and keyboards riding low in the mix; a wonderful slab o’ Southern soul called “Anything But Go” which showcases Ellis’ often-overlooked vocal chops; and “Circuit Rider,” a roadhouse rocker with a greasy, low-slung groove and a hypnotic riff, with plenty of Ellis’ underrated fretwork woven throughout an enchanting blues performance.

Ellis will be touring in support of Red Clay Soul, bringing his dynamic, electrifying performances to new audiences as he attempts to expand the vocabulary of the blues while expanding the variety of venues in which he appears. “From the time I was a young teenager watching B.B. King, Howlin' Wolf, and Billy Preston, to the great new music of today, I've taken what I've learned from these masters and incorporated it into my concerts,” he says. “From BB King, I learned about performing with dynamics. From James Brown, I've learned about putting on a seamless, exciting concert. From the Allmans, I've learned about how to excite fans with extended instrumental jamming. I try to learn something new about putting on shows at every concert I attend.”

We’ve listed Ellis’ confirmed 2016 tour dates below so that you can make plans to attend one of these entertaining, electrifying shows…and don’t forget to pick up a copy of Red Clay Soul!

Buy the CD from Amazon.com