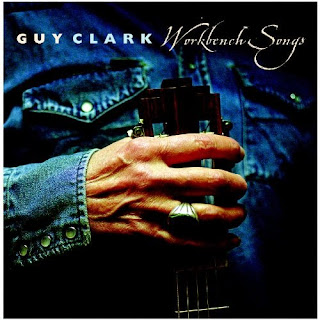 There’s a reason why heavy-hitters like Steve Earle, Vince Gill and the late Johnny Cash considered Texas-born songwriter Guy Clark a legend. A dozen albums into a 30-year-plus career, Clark never ceases to amaze, not only for his subtle, sublime wordplay but also for his flawless, effortless vocal delivery. There’s nobody else in country music that can match Clark’s comfortable drawl or his brilliant lyrical imagery, so rather than beat him, they just record his songs...

Workbench Songs is another solid Clark effort, a masterfully crafted set of folk-country tales as dry as West Texas mesquite and as smartly worded as anything Clark has recorded. Often co-writing with fellow travelers like Lee Roy Parnell, Rodney Crowell, Darrell Scott, and long-time foil Verlon Thompson, Clark’s wry perspective on life, love and the pursuit thereof results in tunes like the hilarious, upbeat “Expose,” the bittersweet “Magdalene,” and the dour “Funny Bone.”

Whether knocking out “No Lonesome Tune,” the obligatory Townes Van Zandt cover; a spicy Tex-Mex original like “Cinco De Mayo In Memphis;” or a duet with Thompson on the folksy, traditional “Diamond Joe,” Clark strips modern country of its prime-time glamour and takes it back to its dusty roots. Guy Clark takes his time between albums, but Workbench Songs again proves that the results are always worth the wait. (Country Standard Time, 2006)