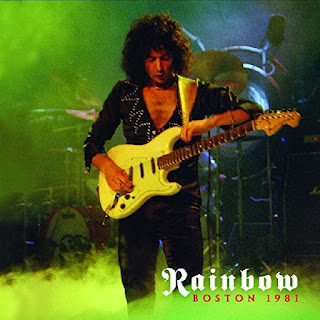 Here’s a gem you may have overlooked in your misguided haste to grab a copy of the new Punky Meadows CD! Purple Pyramid Records, a Cleopatra Records imprint, released Boston 1981 – a scorching live set by Ritchie Blackmore and Rainbow – on May 13th, 2016 on CD and vinyl. Touring in support of the then brand-new Difficult To Cure album, which introduced new Rainbow vocalist Joe Lynn Turner, the band performed at the Orpheum Theatre in Boston in July 1981. Although the show has been frequently bootlegged, and has been swapped between fans online for years, this is the performance’s first legitimate album release.

Boston 1981 is available as a CD packaged in a mini-LP wallet, or as a gatefold double-album set on colored vinyl (your choice of red, blue, or green) with a stitched-in 20-page booklet. The set list for the show is truly electrifying, offering up both classic Rainbow tunes like “Man On The Silver Mountain” and “Love Live Rock n’ Roll” as well as new material like the Beethoven-derived “Difficult To Cure,” a cover of songwriter Russ Ballard’s “I Surrender,” and the Blackmore/Roger Glover original “Spotlight Kid.” In a nod towards his legendary former band (with whom he’d reunite in 1984), Blackmore provides a lively performance of Deep Purple’s “Smoke On The Water.”

Yes, hardcore Rainbow fans tend to sneer at the band’s 1980s-era releases, Blackmore trying to make bank with a more radio-friendly sound similar to Foreigner, who were burning up the charts at the time. And yes, nobody (not even Graham Bonnet) could fill Ronnie James Dio’s enormous shoes, but in ’81 RJD was slumming with Sabbath, so Joe Lynn was recruited halfway through Difficult To Cure to pick up the microphone chores. Still, Rainbow was a pretty raucous outfit throughout the ‘80s, and Boston 1981 captures them on a good night, kicking out the jams with the set list shown below. Ignore at your own risk…