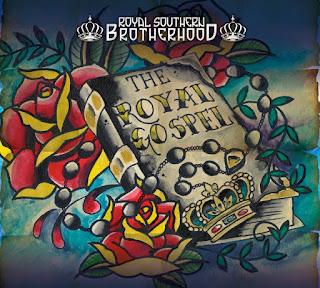 Damn, these Royal Southern Brotherhood guys are a prolific bunch…the band is about to release its fourth studio album in a like number of years on June 24th, 2016 when The Royal Gospel hits the streets. Like all of the RSB’s previous albums, The Royal Gospel will be released by the good folks at Ruf Records. The album features a line-up of singer Cyril Neville, guitarists Bart Walker and Tyrone Vaughan, drummer Yonrico Scott, and new bassist Darrell Phillips. Guest keyboardist Norman Caesar provides some tasty B3 organ on several songs.

The follow-up to 2015’s Blues Music Award-nominated Don’t Look Back album, The Royal Gospel was recorded in a mere seven days in February 2016 at Dockside Studios in Louisiana. Working with noted producer David Z, the band played together live in the studio, their chemistry allowing them to capture many of their performances in a minimum of takes. “We walked in not really knowing what we were gonna do,” Philips says in a press release for The Royal Gospel. “Cyril and Bart come to us with chord progressions, tempos, and ideas and we build together. We’d just fall right into the thing and all of a sudden, there’s the song. On this record, we came together as a band. It was a magical thing to witness.”

The Royal Gospel pushes the band’s blues-rock roots even further, taking advantage of Walker and Vaughan’s intertwined guitars to build a more electric sound that rocks. Hard. Listening to a preview of the album, a number of songs stand out. “Where There’s Smoke There’s Fire” burns like an open flame with its scorching fretwork and soulful vocals. “Blood Is Thicker Than Water” features stellar instrumentation, and the intro alone will blow your mind, the song itself a high-octane mix of the Neville Brothers’ New Orleans soul and blistering blues-rock guitar.

“I’m Coming Home” pairs wonky, angular guitar lines with bluesy vox and martial drums to stunning effect while “Land of Broken Hearts” is a monster, a fire-breathing tsunami with torrents of guitar and crashing percussion. “The whole record is geared toward making a joyful noise,” says Neville in the album’s press release, “but while we’re partying, we still need to be thinking about what’s going on around us. It covers what we’ve seen in our travels over the last few years, and what we’ve lived personally as citizens of the world.”

Royal Southern Brotherhood was formed in 2011 as a sort of roots ‘n’ blues ‘supergroup’ by New Orleans music legend Cyril Neville and guitarists Mike Zito and Devon Allman – all three successful solo artists in their own rights – along with bassist Charlie Wooten and drummer Yonrico Scott. The five released their critically acclaimed self-titled debut album in 2012, its blend of rock, blues, jazz, and funk music finding a ready audience. RSB followed with a live CD and DVD, Songs From The Road, later that year, the set subsequently winning a Blues Music Award.

The equally-acclaimed Heartsoulblood album followed in 2014, after which Zito and Allman left the band to pick up their solo careers. RSB didn’t skip a beat, adding Nashville blues-rock guitarist Bart Walker and Tyrone Vaughan, son of blues legend Jimmie Vaughan, and the new roster recorded Don’t Look Back in Muscle Shoals, Alabama. As good as their albums are, though, it’s the band’s entertaining and dynamic live performances that have won them a loyal and enthusiastic and sure enough they’ll be hitting the road again in the wake of The Royal Gospel. Check out RSB’s summer 2016 tour dates below and plan on catching one of the most electrifying touring outfits in the blues today when they hit your town.