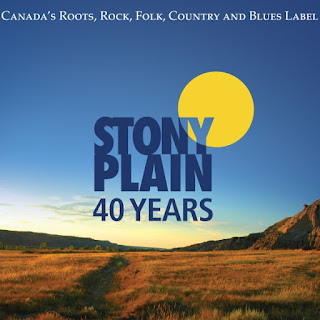 Our friends at Alligator Records aren’t the only label to achieve a significant milestone in 2016 – Canada’s Stony Plain Records, as fine a roots ‘n’ blues imprint as you’ll find on this spinning green globe – is celebrating four decades in the biz this year with the release of a special three-CD set. On June 3rd, 2016 the label will release 40 Years of Stony Plain, the ambitious compilation offering 35 deep cuts from Stony Plain’s storied history of album releases on two CDs as well as a third, twelve-track disc of rarities and previously-unreleased tracks from the archives.

“Celebrating Stony Plain’s 40th Anniversary by putting together this specially priced three CD set has been a joy,” label founder and president Holger Petersen states in a press release for 40 Years of Stony Plain. “Not only going back over those years and selecting some of our favorite tracks, but to also dig deeper to find rare and previously unreleased material by old friends Eric Bibb, Duke Robillard, Maria Muldaur, David Wilcox, the late Bob Carpenter, Walter ‘Shakey’ Horton and the legendary Sam Chatmon and His Barbeque Boys from 1979. With extensive notes and packaging, this stunning collection of 47 songs will be a joyful surprise for true music fans everywhere.”

Formed by Petersen in 1976, Stony Plain Records has released over 400 albums to date, earning the Canadian label a handful of Grammy® nominations and a slew of accolades in their home country, including eleven Juno Awards and 20 Maple Blues Awards. The Blues Foundation in Memphis, Tennessee named Stony Plain as the 2014 label of the year, and Holger Petersen as the broadcaster of the year in 2008 for his work over 30 years as the host of the Saturday Night Blues program, broadcast weekly across Canada by CBS Radio. Petersen has also served as the host of the weekly Natch’l Blues program on CKUA radio for 47 years. A true inspiration to roots ‘n’ blues fans worldwide, Holger Petersen’s love of music has benefited us all. Congrats to Stony Plain Records for 40 great years!