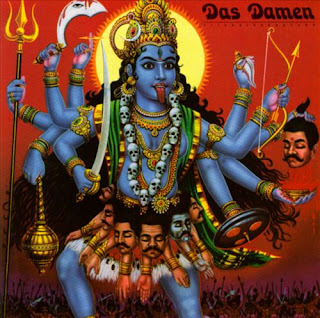 Lost among an ‘80s-era SST label catalog that included Black Flag, Husker Du, the Minutemen, the Meat Puppets, and Sonic Youth, among other notables, New York rockers Das Damen continue to be tragically overlooked by the indie, punk-metal, and alt-rock crowd. Even St. Vitus receives more love these days for their ground-breaking stoner rock albums from back in the day...Das Damen has been reduced to a mere musical footnote on an otherwise legendary record label.

Formed in 1984 by guitarists Jim Walters and Alex Totino, bassist Phil Von Trapp, and drummer Lyle Hyser, Das Damen was originally signed by Sonic Youth’s Thurston Moore to his Ecstatic Peace label. The band released a self-titled EP in 1986 that was later reissued by SST, releasing its full-length SST debut, Jupiter Eye, a year later. The album featured improvisational acid-rock jams not dissimilar to the Bevis Frond with a touch of Sonic Youth-inspired guitar squonk thrown in for good measure. Although the band toured heavily in support of the album, the disc’s poor production and Das Damen’s free-wheeling sound – which was easily a decade ahead of its time – did little to attract an audience.

Triskaidekaphobe was the band’s second album for SST, a solid collection of guitar-driven rockers that incorporated elements of ‘60s psychedelica, ‘70s hard rock and proto-metal and ’80s punk. Named after the technical term for the “fear of the number 13,” Triskaidekaphobe, released in 1988, is in many minds the high point of the Das Damen’s career. First of all, the band received a few more dollars to throw at production this time around, so the sound is better than the muddy mix provided Jupiter Eye.

Constant touring had sharpened the band’s sound to a blistering, surgically-precise aural onslaught. The guitars of Walters and Totino dominate the songs, providing cascading riffs and squalls of feedback. The rhythm section is equally impressive; aside from their explosive drumbeats and heavy bass lines, Von Trapp and Hyser create some interesting textures and patterns behind the guitarist’s flying notes. To top it off, the MC5’s Wayne Kramer stops by to contribute what the liner notes call “riff rock,” showing the young pups how an old dog plays the game. In many ways, the music of Das Damen carries a vibe similar to the MC5. Both bands delivered loud, dense, guitar-driven riff-rock; substitute Das Damen’s metallic tendencies for the MC5’s blues-and-jazz influences and you can see the comparison.

The songs themselves were much sharper on Triskaidekaphobe than previously, the acid-drenched instrumental jams shorter and delivered with laser-like focus. “Reverse Into Tomorrow” kicks off like an R.E.M. tune and shares a similar melodic construction, with washes of guitar and a consistent rhythmic barrage building a wall-of-sound behind Walters’ hidden vocals. Sounding like an imploding high-rise before settling into a martial beat not unlike Killing Joke, Walters and Totino’s guitars provide a storm of spiraling leads amidst a rhythmic fury on “firejoke.”

The chaotic “Ruby Woodpecker” is soaked in gasoline and lit up with syncopated, dissonant fretwork while the raucous instrumental “Seven” benefits from its improvisational nature and undeniably tight band chemistry. As good as the instrumental performances are, if there is one drawback to Triskaidekaphobe, it would be Walters’ vocals. Often lost in the mix, the vox are passable, if not particularly strong. The band would have benefited from finding a ballsy frontman a la Plant to shout above Walters and Totino’s amazing six-string work.

Das Damen wasn’t particular influential, and the band’s audience was small, if loyal. Where Das Damen is remembered, it is for their notorious bit of social protest, better known as The Marshmallow Conspiracy EP. Released a few months after Triskaidekaphobe and including two songs from the album, the EP also featured a non-LP track called “Sky Yen” and the controversial “Song For Michael Jackson To $ell.” Michael Jackson had just purchased the rights to the Beatles’ song catalog for around $100 million, so Das Damen recorded its own warped version of “Magical Mystery Tour,” complete with Beatles samples, calling it “Song For Michael Jackson To $ell” and giving themselves credit. The gloved one’s lawyers got involved, the record was recalled, and the band was promptly given the boot by SST.

Although they would break up a couple of years later, thus missing out on the alt-rock explosion of the early ‘90s where they might have found their audience, Das Damen is fondly remembered by those of us who bought their records and saw this talented band perform live. It is somehow fitting that we remember Triskaidekaphobe on Friday the 13th, because if not for bad luck, Das Damen might not have had any luck at all! (SST Records)