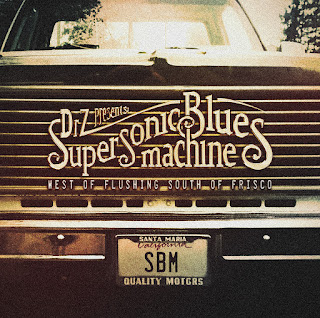 You can tell a lot about a band by who their friends are – and in the case of Supersonic Blues Machine, they come roaring into the room with a monster pedigree. An axe-rattling blues-rock gang consisting of singer and guitarist Lance Lopez, bassist Fabrizio Grossi, and drummer Kenny Aronooff, the band brought along heavy friends like ZZ Top’s Billy Gibbons, Gov’t Mule’s Warren Haynes, Walter Trout, and Eric Gales, among other talented fretburners, as guests on their explosive debut.

Not that the Supersonic guys are any slouches themselves: Texas bluesman Lopez has been kicking the can as a solo artist for over a decade and half a dozen albums; Grossi has toured and recorded with talents like Slash, George Clinton, and Steve Lukather; and Aronoff has kept time behind everybody from John Mellencamp and Bob Dylan to Leslie West and Walter Trout. In other words, the Supersonic Blues Machine is a group of veteran musicians who know their stuff, and still get a thrill out of getting together with friends and jamming.

As such, the band's debut album West of Flushing, South of Frisco, offers the sound of joyous, unbridled music-making that falls a bit heavier on the rock side of the blues-rock equation. Unlike a lot of these kinds of affairs, Grossi wrote or co-wrote most of the songs, and he produced the album with a steady hand, providing West of Flushing, South of Frisco with a dynamic sound that accents the band’s bad-ass instrumental prowess. The album-opening “Miracle Man” starts out with a bit of exotic acoustic guitar, soulful vocals, and blasts of harp before blowing up into a chaotic, bluesy maelstrom.

“Running Whiskey,” with Gibbons, is a hot rod rocket launched by the ZZ Top frontman’s delightfully growled vocals, locomotive rhythms, and scorched earth fretwork, while “Can’t Take It No More” is a near-perfect duet with Lopez and Trout swapping vox and git licks. An inspired cover of Bobby “Blue” Bland’s “Ain’t No Love (In The Heart of The City)” is given an expansive reading that showcase’s Lopez’s immense guitar skills. If you’re a fan of any of the aforementioned guitar stars mentioned above, you’re going to find a lot to like this debut by Supersonic Blues Machine. Grade: B+ (Provogue Records, released February 26, 2016)