Real Gone Gets In the Groove with The Isley Brothers 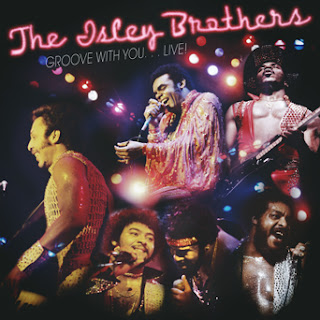 The roots of the Isley Brothers date back to the mid-1950s when teen brothers Vernon, O’Kelly Jr., Rudolph, and Ronald Isley were performing as a gospel quartet. A couple of years after Vernon’s tragic accidental death, the remaining trio moved to New York City and began to pursue a more secular sound, blending R&B and doo-wop with early rock ‘n’ roll. They scored their first hit in 1959 with the classic “Shout,” which peaked at a modest #47 on the charts before eventually going on to sell more than a million platters. Jumping from label to label, the trio enjoyed modest success with a handful of singles before scoring again with their first Top 20 hit, 1962’s “Twist and Shout.” Jimi Hendrix played with the Isleys for a while, contributing guitar to the 1964 single “Testify,” released by the brothers’ own T-Neck Records.

The Isley Brothers struggled throughout the 1960s, mixing Top 40 hits like “This Old Heart of Mine (Is Weak For You)” for Motown with a number of near chart misses. The brothers resurrected their T-Neck label for the release of 1969’s “It’s Your Thing,” which included younger brother Ernie on bass. Mixing a little funk into their soulful sound, the song became a smash hit, topping the R&B chart and rising to #2 on the ‘Hot 100’ singles chart while earning the band a Grammy™ Award. The album by the same name rose to #22 on the pop chart, launching the Isley Brothers into the stratosphere. The singing trio added musical talent to the band with younger brothers Ernie (guitar) and Marvin Isley (bass) and brother-in-law Chris Jasper (keyboards). Throughout the ‘70s the band scored hit after hit with classic albums like 1973’s 3+3, 1974’s Live It Up, 1975’s The Heat Is On, 1976’s Harvest For The World, and 1977’s Go For Your Guns, among others.

With a string of chart successes behind them, the Isley Brothers decided in 1980 to record a live album. Rather than record a live performance with a mobile truck, however, the Isleys decamped to Bearsville Sound Studio in Woodstock, New York, recording the album live in the studio. The resulting effort – Groove with You…Live! – was enhanced with an overdubbed audience and introductions by MC “Gorgeous” George Odell to create a live album with pristine studio sound. However Columbia Records, which was distributing the band’s T-Neck Records releases, passed on the album preferring to wait for another studio disc, and the Isley’s Groove with You…Live! was shelved until 2015, when it was dusted off, remixed (removing the faux crowd noise), and included as part of an Isley Brothers retrospective box set.

The Isleys’ Groove with You…Live! was later released as a limited edition two-disc vinyl set with the audience noise re-inserted into the mix for Record Store Day 2015. On September 2, 2016 the album will finally see proper release on CD when Real Gone Music reissues Groove with You…Live! Offering up classic Isley Brothers hits like “Summer Breeze,” “That Lady,” “Fight The Power,” and “Take Me To The Next Phase” among its dozen tracks, the album was re-mastered by Mark Wilder and Chris Le Monde and features new liner notes by The Second Disc’s Joe Marchese which feature quotes from Ernie Isley and Chris Jasper. Call it the “long lost live” Isley Brothers album, Groove with You…Live! is an invaluable document by a legendary group and will appeal to any fan of vintage funk, soul, and rock ‘n’ roll.

Buy the CD from Amazon.com: The Isley Brothers' Groove with You...Live!
Posted by Rev. Keith A. Gordon at Sunday, July 24, 2016