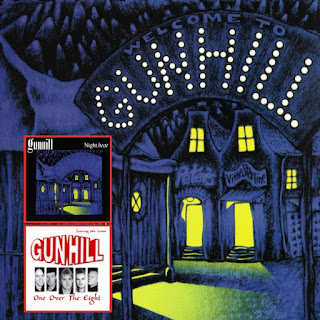 The talented John Lawton is one of those journeymen rockers who leave excellence in their wake as they jump from one project to another over the decades. The British-born singer first came to prominence as frontman for the German hard rock outfit Lucifer’s Friend, touring and recording with the legendary band from 1969 through ’76, appearing on five albums before leaving to join Uriah Heep.

Often overlooked, however, is Lawton’s early ‘90s-era band GunHill. With Lawton on vocals, Brian Bennet on guitar, bassist Neil Kavanagh, and drummer Chris Jones, GunHill released two studio albums of prog-flavored hard rock similar to Rainbow or King’s X – 1995’s fan club exclusive One Over The Eight cassette and 1997’s Nightheat – both of which have been out of print for ten years or more, and are incredibly hard to find.

Answering the prayers of John Lawton fans worldwide, both albums have been reissued as a two-disc set with bonus tracks, representing a comprehensive collection of GunHill studio recordings (a live album was released in 1999). Provided a fresh digital re-mastering, the reissue was overseen by Lawton personally and has his approval.

In a press release for the reissues, Lawton says “these two CDs are part of my musical history when I played together with some fine musicians, some quite young and some a bit more experienced. It was an opportunity to cover some tracks that I look back on as really great songs and a few original tracks that have stood the test of time.”

Buy the CD from Amazon.com: GunHill's One Over The Eight/Nightheat