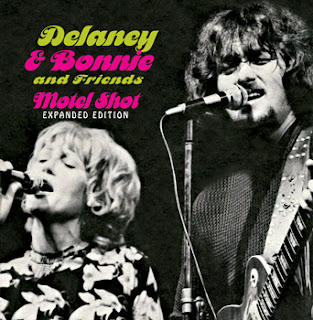 Our friends at Real Gone Music have announced their February slate of new releases and it includes a couple of goodies for classic rock fans – Delaney & Bonnie and Friends’ Motel Shot and Jim Kweskin’s Relax Your Mind – both of which are scheduled for February 3, 2017 release by the archive label.

Delaney & Bonnie and Friends already had a pretty solid reputation by the time of the 1971 release of Motel Shot. Albums like 1969’s Home and 1970’s To Bonnie From Delaney featured an earthy proto-Americana sound that mixed Southern rock, Memphis soul, blues, and country music that few other bands were offering at the time. The talented members of Delaney & Bonnie’s band provided musicians for both Joe Cocker’s Mad Dogs & Englishmen tour and Eric Clapton’s Derek and the Dominoes.

Motel Shot was the fourth studio album by Delaney & Bonnie Bramlett, the title referring to the band’s frequent ‘after hours’ jams back in the room after a show. The sessions for the album originally were held in engineer Bruce Botnick’s living room, where several songs were recorded for possible release by Elektra Records. When the deal went bad, the project moved to Atco Records, the Bramlett’s former label, which had the band re-record the material in a proper studio. It was this second version that was originally released on vinyl by the label, and the album has only ever been released on CD in 2003 in Japan. 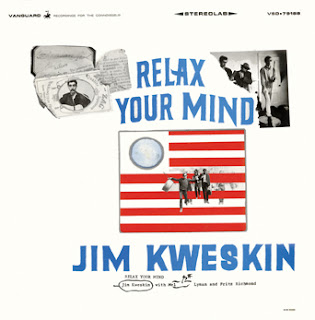 Guitarist Jim Kweskin is one of the unsung heroes of the early ‘60s folk scene. Based in the Boston area, Jim Kweskin and the Jug Band recorded a pair of critically-acclaimed albums for Vanguard Records – 1963’s Unblushing Brassiness and 1965’s Jug Band Music – that featured talents like guitarist Geoff Muldaur, harmonica player Mel Lyman, and singer Maria Muldaur. Kweskin himself was a skilled and underrated six-string stylist, performing in the fingerpicking style of bluesmen like Blind Boy Fuller and Mississippi John Hurt.

Kweskin stepped away from the Jug Band to release a 1965 solo album, Relax Your Mind, the guitarist accompanied only by Jug Band members Lyman on harmonica and washtub bass player Fritz Richmond. A less raucous but no less inspired effort than his Jug Band recordings, Relax Your Mind delved into folk standards as well as blues, gospel, and African music with a nuanced, stripped-down sound. The album was compiled from two sessions, one an impromptu jam in the Vanguard Records studios and the rest taken from a live performance recorded at Cambridge’s Club 47 a year previous.

Lyman’s stream-of-consciousness liner notes from the original LP are included on this Real Gone Music CD reissue, which also features quotes from Kweskin himself. Relax Your Mind has been re-mastered by engineer Mike Milchner at SonicVision studios and appears on CD for the first time (as far as I can tell).