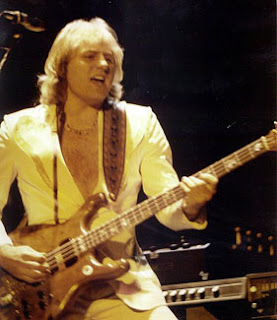 It is with no little sadness that we have to report the death of progressive rock legend Greg Lake, who passed away on Wednesday, December 7th, 2016 after a lengthy fight with cancer. Lake was 69 years old. Lake’s death follows that of his longtime bandmate Keith Emerson, who passed away in March.

A talented singer, guitarist, and bass player, Lake started playing guitar at the age of twelve and, by the time he hit seventeen, Lake had joined his first band, the Unit Four. As most musicians did at the time, Lake played with several bands during the mid-to-late ‘60s (including the Gods, with future Uriah Heep member Ken Hensley). Lake first came to prominence with prog-rock pioneers King Crimson when founder Robert Fripp – the two friends shared a guitar teacher – asked him to join as the band’s singer and bass player.

Lake contributed to King Crimson’s ground-breaking 1969 debut album, In the Court of the Crimson King, and sung on the band’s sophomore effort, 1970’s In the Wake of Poseidon before leaving Crimson to form Emerson, Lake & Palmer with keyboardist Keith Emerson of the Nice and drummer Carl Palmer from Atomic Rooster. The trio released their self-titled debut album in late 1970, scoring a minor chart hit with Lake’s song “Lucky Man” (written when he was twelve). The album’s mix of rock, jazz, and classical music struck a chord with then-new FM radio and went Top 10 in the U.K. and Top 20 in the U.S. Along with King Crimson and Yes, ELP helped define the progressive rock genre during the early 1970s.

ELP would go on to commercial superstardom, scoring chart hits with albums like Tarkus (1971), Trilogy (1972), and Brain Salad Surgery (1973) before going on hiatus in 1974 and breaking up in the wake of the commercially unsuccessful 1979 album Love Beach. In 1975, while still ostensibly a member of ELP, Lake scored a major U.K. hit with “I Believe In Father Christmas,” the song selling tens of thousands of copies and becoming a holiday standard, subsequently reissued several times throughout the years as well as appearing on the 1977 ELP compilation album Works, Volume Two. 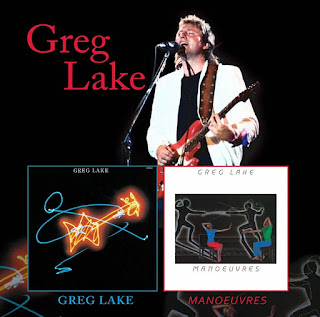 During his break with ELP, Lake recorded a pair of solo LPs – 1981’s self-titled album and 1983’s Manoeuvres – the former of which brought the guitarist modest chart success. After briefly performing with ‘80s-era chart-toppers Asia, Lake formed the short-lived Emerson, Lake & Powell with journeyman drummer Cozy Powell (Rainbow), the trio releasing a lone album in 1986 before breaking up. Lake toured throughout the 1980s with his own band, reuniting with his old ELP bandmates in 1992 for the Black Moon album and subsequent tour. ELP’s In The Hot Seat followed in 1994, but by the end of the decade, the band had broken up again.

Lake toured in 2001 as part of Ringo Starr & His All-Starr Band and generally kept busy touring with his own Greg Lake Band through the 2000s before reuniting with Emerson for a 2010 acoustic tour. Emerson, Lake & Palmer reunited one last time for the 2010 High Voltage Festival in London in celebration of the band’s 40th anniversary, the performance subsequently released on CD and DVD as High Voltage. Lake was finishing writing his autobiography, titled Lucky Man, at the time of his death; the book is scheduled for 2017 publication. Although frequently criticized as ‘pretentious,’ ELP influenced a generation of musicians to follow, artists as diverse as Dream Theater, Iron Maiden, and Spock’s Beard, and there’s no denying Greg Lake’s enormous talents as a singer, songwriter, and guitarist.

In a press release, Lake’s longtime manger and friend Stewart Young states, “Yesterday, December 7th, I lost my best friend to a long and stubborn battle with cancer. Greg Lake will stay in my heart forever, as he has always been. Despite his illness which he knew to be terminal he always took the view about his life, career and family that he was indeed a lucky man... His family would be grateful for privacy during this time of their grief. Many thanks.”
Posted by Rev. Keith A. Gordon at Saturday, December 10, 2016