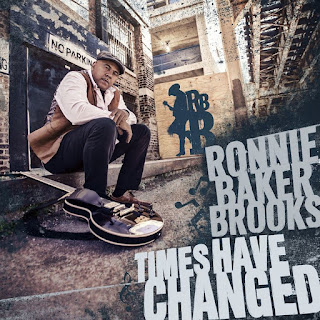 Chicago blues guitarist Ronnie Baker Brooks will release his first album in nearly a decade when Provogue Records drops Brooks’ Times Have Changed on January 20th, 2017. Produced by Steve Jordan, who has worked with talents like Keith Richards and Eric Clapton, Times Have Changed was recorded at the legendary Royal Studios in Memphis and Nashville’s Blackbird studio.

Times Have Changed features a number of storied guests, including Memphis soul legend Steve Cropper, “Big Head” Todd Mohr, Bobby “Blue” Bland, Felix Cavaliere (The Rascals) and, of course, Lonnie Brooks. Recording at Royal Studios in Memphis, Brooks and Jordan enlisted the Hi Rhythm Section of brothers Teenie Hodges on guitar, Charles on keyboards, and drummer Leroy Hodges, who played on hits by artists like Al Green and Ann Peebles. “We used the same mics that Al Green used on his record,” Brooks says in a press release for the new album. “Matter of fact, we were using much of the same band! It kind of took that vibe.”

Brooks recorded several tracks for Times Have Changed in Nashville, taking advantage of the talent available in the “Music City.” Says Brooks of the studio, “it had great hospitality, a great vibe, great tone, great equipment. And of course I got to get closer to some of the musicians who live there, Felix Cavaliere, Steve Cropper – they all live there, and it just created a great atmosphere. One of the key things for me was that we got Todd Mohr there, and he was willing to play rhythm guitar along with Lee Roy Parnell, so we got a nice little chemistry going with the three guitar parts together.”

The son of legendary bluesman Lonnie Brooks, Chicago-born Ronnie Baker began playing guitar at around six years old. At age nineteen he joined his father’s band, the young guitarist playing alongside blues giants like B.B. King, Buddy Guy, and Koko Taylor. Brooks launched his solo career with the 1998 release of his debut album Golddigger, for which he received a Blues Music Award nomination as “Best New Artist.” Brooks released his sophomore effort, Take Me Witcha, in 2001 and followed up with The Torch in 2006, the album produced by Jellybean Johnson (The Time) and including contributions from bluesmen Eddy Clearwater and Willie Kent as well as Memphis rapper Al Kapone. Most recently, Brooks has toured with his father and younger brother Wayne Baker Brooks as the Brooks Family Band.