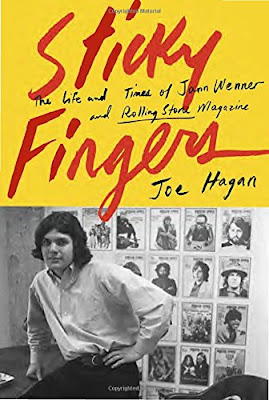 As advertised on the book’s front cover, Sticky Fingers is author Joe Hagan’s 500+ page biography of Rolling Stone magazine founder Jann Wenner as well as a capsule history of the legendary music rag that Wenner founded in 1967. That Wenner and his magazine would co-star together in this hefty doorstop of a tome is entirely appropriate in that one is pretty much inseparable from the other – you can’t divorce Rolling Stone from Wenner’s guiding hand, and vice versa.

Joe Hagan was particularly suited to write the book; an established journalist published in outlets like New York magazine, the Wall Street Journal and, yes, Rolling Stone, the author had acclaimed profiles of political and media movers-and-shakers like Hillary Clinton, Henry Kissinger, and Dan Rather under his belt when Wenner asked him to pen his biography in 2013. Careful of the minefield that lay ahead, Hagan maneuvered himself to the resulting story quite artfully, promising Wenner naught but an honest overview of his storied, and often controversial life, something that he has delivered in spades.


Wenner provided Hagan full access to both himself and his massive archive of memorabilia, including photographs, personal letters, and email correspondence, all of which is complimented by hundreds of interviews with Wenner’s friends, former and current Rolling Stone staffers, and the legion of celebrities that “Mr. Rolling Stone” has hobnobbed with during the magazine’s five decades. The resulting book may not be to Wenner’s liking – the story doesn’t frame the RS founder in particularly glowing terms – but it seems to portray him honestly as a narcissistic, ego-driven social climber who pursued wealth and fame at the expense of friendships, romance, and his own bruised homosexuality (which itself was an open secret for decades, even among us on the lowest rungs of the music media)...in short, a relatively-successful American businessman. 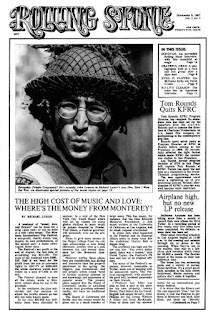 Many of Wenner’s aggrieved former employees come across as whiny tots jealous of dad’s infamy, and although Wenner’s relationships with his most famous writers like Hunter S. Thompson, Tom Wolfe, and Lester Bangs, as well as photographer Annie Leibovitz – all of whom achieved a modicum of fame due to the magazine – are complicated, there’s no doubt that Wenner’s cash-grabbing inclinations short-sheeted those that had helped make the magazine the successful music industry behemoth that it became. Wenner was no capitalist in sheep’s clothing sleeping with the lambs, but rather more of a “fellow traveler,” leaning left politically but harboring dreams of greater things. The prototypical “yuppie,” Wenner never really “sold out” as he had always aspired to fame and fortune and the hollow social status that would allow him to associate as an equal with his musical idols.

Wenner’s relationships with his idols have often been equally complicated and fraught with the clash of too many large egos. A bourgeoning relationship with John Lennon was torpedoed when Wenner chose money over his friendship, leaving the ex-Beatle bitter and feeling betrayed for decades. Wenner and Rolling Stones frontman Mick Jagger enjoyed a similarly complex dynamic, Jagger often playing the magazine publisher like a banjo, manipulating Wenner’s need for approval to help improve his own fortunes. As Hagan found, Wenner frequently left a trail of broken (or at least badly-damaged) relationships behind him through the years, from celebrity friends to former employees.


Rolling Stone has its roots in 1960s-era San Francisco when Wenner took the idea of a rock ‘n’ roll magazine that his editor at Ramparts magazine (where he was working) and Bay area music promoter Chet Helms were both toying with and made it happen. With money invested by his mentor, San Francisco Chronicle music critic Ralph J. Gleason, and from his family and that of his wife-to-be Jane, Wenner launched the magazine that would come to define the decade, putting John Lennon on the cover of the first issue in late 1967. The Beatles, the Rolling Stones, and local S.F. bands with growing national followings like the Grateful Dead and the Jefferson Airplane were prominently featured in the zine’s pages, along with record reviews by early rock critics like Jon Landau, Dave Marsh, and Lester Bangs. To say that the publication struggled, monetarily, during the early years would be an understatement, but as Hagan relays, Rolling Stone has always had cash flow problems through the years, due in large part to the requirements of Wenner’s extravagant lifestyle. 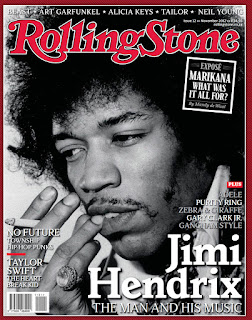 Wenner moved the magazine to New York City in 1977, ostensibly to be closer to Madison Avenue and the potential of lucrative advertising dollars. With the move eastward, Wenner shed whatever counter-culture pretensions the magazine might have still clung to, as Rolling Stone embraced Hollywood-bred celebrity and, as the ‘80s wore on, the magazine would feature actors like Tom Cruise and Richard Gere on the cover as frequently as rockers like Bruce Springsteen and U2’s Bono (both of whom would become Wenner’s buddies). The magazine expanded further into pop music with the ascendance of MTV, offering features on Michael Jackson, Madonna and, later ‘90s teen artists like Britney Spears. Although the rag would endure a certain amount of mumbled criticism for its hype of the mundane, people were buying RS in ever-greater numbers, and the publication would rake in tens of millions of dollars for Mr. Wenner during the 1980s and ‘90s and into the new millennium.

Wenner would expand his media empire through the years with various publications like Outside and Us Weekly, the latter of which contributed millions of shekels to the Wenner bank account, but it was Rolling Stone that remained the flagship title of the empire. During the last 20 years of its existence, Rolling Stone – and, by association, Wenner himself – has become the de facto institutional memory of the classic rock 1960s and ‘70s, revering those artists that Wenner himself originally idolized. Hagan delves into the formation of the Rock & Roll Hall of Fame Foundation and Wenner’s control of same, which was used to snub bands like Kiss and Bon Jovi while inducting the publisher’s favorite artists (as well as too many non-rock ‘n’ rollers). The book also digs into Wenner’s more recent attempts to ensure his journalistic legacy, especially the inspired work of writer Matt Taibbi – the true heir to Hunter S. Thompson – on the financial crash of 2008 as well as the UVA rape article, a travesty that threatened to overshadow five decades of otherwise solid (and award-winning) journalism by the publication.


As mentioned above, Jann Wenner comes across in Sticky Fingers like an autocratic and self-centered creep, double-dealing his employees and exploiting friendships wherever there was a dollar to be made. Wenner’s frequent (and tawdry) affairs with both men and women are provided a thin sheen of admiration, as is his prolific use of cocaine and vodka. In fact, only Wenner’s beleaguered wife Jane comes across as sympathetic here; smart, sexy, sensitive, and quite in love with her emotionally-detached mate, the waiflike Mrs. Wenner charmed all who met her and, for a long time, she served as her husband’s tether to reality and social fixer, putting water on Jann’s frequently fiery and tumultuous relationships. Hagan doesn’t offer up every Rolling Stone controversy – the notorious firing of critic Jim DeRogatis over a negative Hootie & the Blowfish album review isn’t even mentioned – this particular mini firestorm probably a more common event than anybody cares to remember. 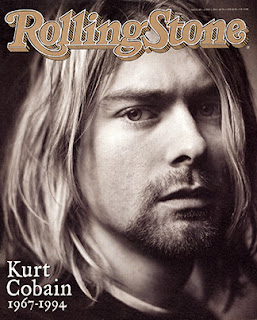 There are plenty of negative things that could be said about Rolling Stone and Mr. Wenner in particular. The magazine’s bias against heavy metal bands, partially fueled by Wenner’s dislike of the genre, clearly flew in the face of the late ‘70s/early ‘80s zeitgeist, as did the publication’s notorious ignorance of rap and hip-hop, the predominant commercial music form of the ‘90s – Seattle, grunge, and the alt-rock of the decade notwithstanding. The publication has been unfairly criticized for its unrepentant “rockist” leanings, an absurd cavil considering RS’s roots as a rock ‘n’ roll magazine and a criticism that flies in the face of reality. A look at the faces on the cover of Rolling Stone during the 1980s and ‘90s finds an abundance of pop-oriented stars like Madonna, Cyndi Lauper, Bette Midler, Tina Turner, and Janet Jackson, among others, who are represented frequently alongside those of male rockers and Hollywood celebs (especially if Wenner thought that they’d move copies off the newsstand).

More egregious, in my mind, is the publication’s declining coverage of blues artists through the years. Well into the 1970s, blues music found some editorial representation in the pages of Rolling Stone, however meager. This coverage gradually decayed even as artists like Stevie Ray Vaughan and Robert Cray helped bring the blues to new audiences, and Cray seems to be the only blues artist to be featured on the cover of hundreds of issues published in the 1980s and ‘90s (and, no, neither the Rolling Stones or Eric Clapton count). People of color, overall, have fared less well in the pages of Rolling Stone than their white counterparts, cover features on Tupac, Living Colour, Prince, and Ice-T notwithstanding. No publication can be everything to everybody, but RS has long been casually waving from the dock as the ship of cultural diversity sailed out of sight. 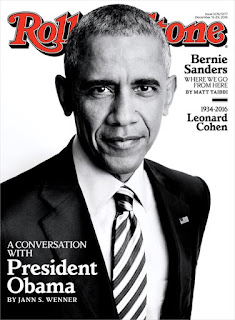 Joe Hagan has nevertheless done a solid job with Sticky Fingers, walking the tightrope between respectable journalism and tawdry celebrity gossip without lapsing into navel-gazing or historical revisionism. He paints Jann Wenner as a complex individual driven to success, a flawed man with a certain amount of self-loathing and denial over his own nature (Wenner finally came out as gay in 1995) who often failed to treat friends and employees with respect or kindness. Hagan displays the same sort of love/hate relationship with his subject as do many of Wenner’s associates.

On the other hand, Hagan also portrays Rolling Stone magazine as the true American success story that it is – Paul Williams’ Crawdaddy! music zine was struggling and Greg Shaw was still publishing garage-rock fanzines when Wenner created the publication that will forever be his legacy. Over its 50+ years, Rolling Stone has been shaped by the whims and desires of Jann Wenner, and his instinct has served the magazine well overall, as it has outlasted and outpunched its competition. Rolling Stone helped bring rock criticism beyond its fanzine roots and into the mainstream and, in doing so, helped define the music and inspiring hundreds of musicians and fledgling writers such as myself.

The “Rolling Stone interview” codified conversation as an art form in and of itself, and the magazine broke new ground in art, design, photography, and journalism while introducing us to talents like Annie Leibovitz, Hunter S. Thompson, Cameron Crowe, Ralph Steadman, and many others. Hagan tells as much of this story as possible, warts and all. With the impending sale of Rolling Stone comes the end of an era, Sticky Fingers a testament to Jann Wenner’s original vision of a rock ‘n’ roll magazine that helped shape the culture it documented for decades. Grade: A (Alfred A. Knopf, published October 24, 2017)