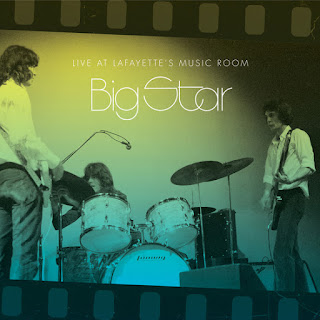 In the 45 years that have elapsed since the original event, the May 1973 promotional concert by Memphis rock legends Big Star has become a large part of the band’s (still thriving) mythology. Performing at Lafayette’s Music Room in their hometown in front of an audience of critical cognoscenti attending the Memphis Rock Writers Convention, the band’s high-octane performance and whipsmart songwriting convinced a not insignificant number of members of the rock ‘n’ roll media to pen overwhelmingly positive reviews for #1 Record, Big Star’s recently-released debut album, for their respective publications. Critical acclaim doesn’t pay the bills, however, and when the record-buying public didn’t buy into the hype, the band pursued a slow and very public break-up.

The casual Big Star fan may be unaware, however, that the band played essentially the same set at Lafayette’s Music Room a couple months earlier. Opening for R&B legends Archie Bell & the Drells, Big Star performed as a three-piece with singer and guitarist Alex Chilton, bassist Andy Hummel, and drummer Jody Stephens (Chris Bell having quit the band). The show had been taped for posterity and was originally released on CD as disc number four of Big Star’s 2009 box set Keep An Eye On the Sky. Omnivore Recordings has provided the concert with its first-ever standalone release on CD, double-LP, and as a digital download. Featuring material from Big Star’s #1 Record as well as covers of song of the band’s favorite songs by Todd Rundgren, the Kinks, and the Flying Burrito Brothers, the performance has been sonically restored and newly re-mastered for this reissue.


Sadly, I never got the chance to see Big Star perform in person – I was still in high school during their early touring days – and I only really caught up with the band via the solo Alex Chilton single “Bangkok,” which had received heavy airplay in the early ‘80s on Vanderbilt University’s WRVU-FM station in Nashville. Nevertheless, Live At Lafayette’s Music Room sounds a lot like I had always imagined Big Star would sound like, the set list offering up plenty of jangly power-pop and British Invasion-styled rock ‘n’ roll. The album opens with “When My Baby’s Beside Me” from #1 Record, the song a perfect distillation of the band’s seldom-expressed romantic yearnings, with Chilton doing his best to sing the lines Chris Bell had perfected in the studio.

A new Chilton track, “She’s A Mover,” had been written for a solo project but was repurposed for the band. Delivered as a soulful but muscular rocker with fractured vocals, angular guitar, and an irregular but slightly funky rhythmic undercurrent, the song would later re-appear on Big Star’s second album, 1974’s Radio City. The teenage ennui displayed by “In The Street” is amplified by the raucous live setting, the song’s undeniable melody and propulsive percussion peppered with Chilton’s stinging guitar licks. The wistful ballad “Thirteen” is one of the shining gems of the Chilton songbook, its lyrics cutting through the songwriter’s cynical facade to reveal the heart of a romantic; Chilton’s acoustic fretwork enhances the song’s fragile emotion.

Of the cover tunes performed by the band this night, Gram Parson’s “Hot Burrito #2,” originally recorded by the Flying Burrito Brothers, is imbued with a ramshackle, late ‘60s Rolling Stones vibe with reckless percussion and shards of guitar rising through the muddy mix. The T. Rex obscurity “Baby Strange” is offered a solid reading, Stephens’ powerful drumbeats providing a foundation for Chilton’s jagged riffs and Hummel’s fluid bass lines. An inspired reading of Todd Rundgren’s “Slut” showcases the trio’s growing rock ‘n’ roll muscles, capturing the original zeal and odd meter of the song with a unique energy and pacing of its own. It’s with their original songs that Big Star really shines, though, as with Bell’s lovely “I Got Kinda Lost” or his Beatlesque “O My Soul” with its R&B-tinged melody, syncopated percussion, and jangly guitar (later revisited on Radio City).


Big Star’s Live At Lafayette’s Music Room includes in-depth liner notes written by noted rock critic and music historian Bud Scoppa, who places the performance in proper context amidst the swirl of rumour and myth that swirls around the band. A downloadable vintage interview with Chilton and bassist Andy Hummel by local radio DJ Jon Scott provides fans with a look behind the curtain. The CD’s sound quality is above-average, with a slight hollow echo to the performances, which is to be expected from any antique recording. Sounding more like a pretty good audience bootleg than a sterile soundboard recording, Live At Lafayette’s Music Room does a solid job of capturing the band’s live dynamic and preserving it for modern ears.

Although undeniably a major addition to the Big Star canon, Live At Lafayette’s Music Room raises as many questions as it answers. An important bridge between #1 Record (created as a foursome) and the band’s fractured 1974 sophomore effort Radio City (performed as a trio), Chris Bell’s absence is apparent in spite of his lingering presence on a large number of the 20 songs performed here. What might have Big Star achieved if Bell had remained and helped make Radio City a more cohesive band statement? What would be his contribution to the band’s live sound? Some things just weren’t meant to be known, perhaps. Live At Lafayette’s Music Room is nevertheless an entertaining and invaluable collection for those of us too young to have seen Big Star in the band’s prime. Grade: A- (Omnivore Recordings, released January 12, 2018)

Also on That Devil Music.com:
Alex Chilton’s A Man Called Destruction CD review
Chris Bell’s I Am the Cosmos CD review
Big Star’s Nothing Can Hurt Me DVD review
Posted by Rev. Keith A. Gordon at Monday, February 05, 2018