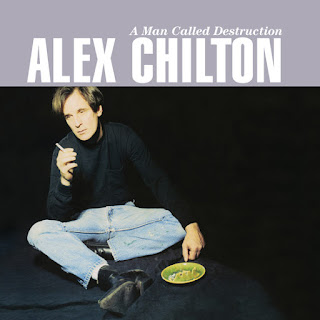 By the time that he returned to Ardent Studios in Memphis, Tennessee during the summer of 1994, Alex Chilton had already enjoyed a tumultuous and storied career. Joining blue-eyed soul band the Box Tops at the young age of 16, Chilton experienced the highs of the record biz as the band scored late ‘60s hits with classic songs like “The Letter,” “Soul Deep,” and “Cry Like A Baby.” After a brief foray exploring the possibilities of solo work, Chilton formed power-pop legends Big Star with like-minded musicians Chris Bell, Andy Hummel, and Jody Stephens. Big Star would deliver a pair of critically-acclaimed albums in 1972’s #1 Record and 1974’s Radio City (a third Big Star album would be released in 1978, years after the band’s break-up), but when commercial success seemed out of reach, Chilton re-started his solo career.

To say that Alex Chilton’s solo career was “checkered” is in no way an exaggeration. As Big Star’s posthumous influence and reputation grew and inspired bands like the Posies, the Replacements, and R.E.M., among many others, expectations soared whenever Chilton sojourned into the recording studio. For every acclaimed effort like 1985’s Feudalist Tarts there would be a sloppy, undisciplined work such as 1979’s Like Flies On Sherbet, Chilton often recording doomed, anarchistic and anachronistic albums for European labels charmed by his legend. Chilton even took a brief hiatus from music in the early ‘80s, washing dishes in a New Orleans restaurant, returning only to subsume his identity as a (mostly) anonymous member of Tav Falco’s Panther Burns. Chilton had largely beaten his personal demons by the time he went home and recorded A Man Called Destruction, and the long out-of-print gem has finally been restored to the Chilton catalog.


A Man Called Destruction is every bit as eclectic as the artist that recorded it, Chilton mixing up the rockin’ style of R&B that he’d perfected with the Box Tops with Big Star-styled power-pop and elements of blues, soul, gospel, and country music. Featuring original material as well as covers from Chilton’s big book of favorites, A Man Called Destruction was recorded with old friends like bassist Ron Easley and drummer Ron Garrison as well as a brace of local Memphis studio pros like keyboardists Al Gamble and Charlie Hodges and saxophonist Jim Spake. The result was an engaging, if often-confusing collection of sounds, none of them anywhere close to resembling “contemporary” in 1995, a year during which hip-hop and alt-rock ruled the charts.

For instance, Chilton’s cover of the Fats Domino hit “Sick and Tired” (originally written and recorded by Louisiana native Chris Kenner) skews towards a New Orleans big band sound, with a jazz-flecked rhythm track providing locomotion behind Chilton’s spirited Mardi Gras vocals. The original “Devil Girl” got plenty of college radio airplay back in the day, the song’s low-slung groove, sultry lyrics, and smoky vocal delivery matched with syncopated rhythms and Chilton’s skronky, chaotic fretwork. I never cared much for the loopy “What’s Your Sign Girl,” Chilton’s fatback guitarplay outshining his goofy vocals, but a cover of his pal Keith Keller’s “Lies” is a muscular rocker with explosive percussion and blistering six-string work.


Jimmy Reed’s “You Don’t Have To Go” is provided a reverent, bluesy reading with Chilton’s surprisingly skillful harp playing. The instrumental “Boplexity” is a wild, swinging affair, with Charlie Hodges’ excited keyboard-pounding and Chilton’s mighty fine chicken-pickin’ reminding these ears of Booker T & the M.G.’s trailblazing mix of blues, jazz, and R&B whereas a cover of the Jan & Dean B-side “New Girl In School” is appropriately whimsical, Chilton delivering his best Brian Wilson vocal impersonation while an extended guitar solo moves the surf-pop ditty dangerously close to leather-clad garage-rock turf. “Don’t Know Anymore” is a jazzy, late-night dirge with more than a little blues in the grooves, sparking some flashy guitar licks and accompanied by icy blasts of horn.

The album-ending “Don’t Stop” is the kind of power-pop creation that Chilton defined with Big Star – melodic, but with ramshackle guitar and the sort of joyous sonic construction that would inspire a hundred bands in the 1980s and ‘90s. The Omnivore Recordings reissue of A Man Called Destruction tacks seven previously-unreleased bonus songs onto the original track list, including an outtake of “Devil Girl” with double-tracked vocals that heighten the song’s surrealistic malevolence. Chilton’s original “You’re My Favorite” is a rockabilly-tinged romper-stomper with exhilarating guitar riffs and propulsive rhythms while “Please Pass Me My Walkin’ Shoes” is a similarly-flavored 1950s throwback with a Carl Perkins heart and a Chicago blues soul that features raucous fretwork and an overall reckless vibe. A mash-up of the flighty “Why Should I Care” – a jazzy pastiche of British dancehall rhythms – with the somber, dark-hued “It’s Your Funeral” is not as odd a pairing as one might think at first, two sides of the same coin as it were.


One of Alex Chilton’s final studio albums, A Man Called Destruction can also easily be considered one of his best recordings overall. Chilton’s joyful performances at Ardent Studios provide insight into his love of music of all stripes while spotlighting his vastly underrated guitar skills. The cult rocker seldom sounded as happy, inspired, and motivated as he does playing on these tracks, Chilton willing to discard the mythology that had grown up around him like so much kudzu vine to simply play what his heart desired, and the results speak for themselves. Eclectic it may be, but A Man Called Destruction displays Chilton’s immense if often-unused talents like few albums in the artist’s catalog, bolstering his status as the man who launched a musical revolution with the sound of his guitar and expressive vocals. Grade: A (Omnivore Recordings, released August 24, 2017)

Also on That Devil Music.com:
Big Star’s Nothing Can Hurt Me movie review
Chris Bell’s I Am The Cosmos CD review