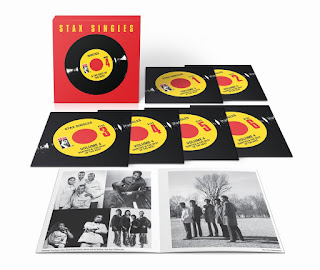 Craft Recordings – the catalog division of Concord Music – has announced the upcoming release of Stax Singles, Vol. 4: Rarities & the Best of the Rest. The whopping six-CD box will be available on February 9th, 2018 and will feature a wealth of long-gotten single B-sides and other rarities exploring the legendary record label’s explorations in rock, pop, blues, soul, and gospel music from 1960-1975.

Offering recordings from the catalogs of both Craft and Rhino Records, who jointly control Stax’s masters, Stax Singles, Vol. 4: Rarities & the Best of the Rest features four new in-depth essays by music journalist Lee Hildebrand, writer and music historian Alec Palao, and box set co-producers Bill Belmont and Rob Bowman, who is also the author of the excellent Soulsville USA: The Story of Stax Records. This fourth volume of material from the Stax vaults follows box sets released in 1991, 1994, and 1994 and takes a look beyond the label’s R&B chart hits to dig into the crates and resurrect singles from Stax subsidiaries like Ardent and Hip (rock); Chalice and Gospel Truth (gospel); and Enterprise (country) as well as instrumental and blues tracks from the pre-Stax Satellite Records imprint.

Buy the box on Amazon.com: Stax Singles, Vol. 4: Rarities & the Best of the Rest