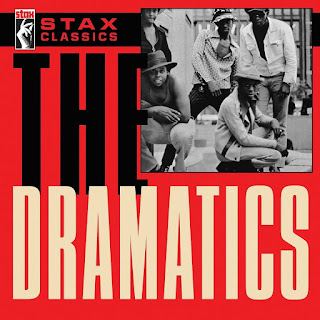 Originally formed in Detroit in 1964 as the Dynamics, R&B legends the Dramatics recorded singles for a number of independent labels during the mid-to-late 1960s, including Golden World and Sport Records, where they scored a minor R&B chart hit with “All Because of You.” The band signed with Stax Records in 1968 but, after releasing one unsuccessful (albeit impressive) single – “Your Love Was Strange” – the Dramatics took off for greener pastures.

The band’s association with the Memphis music institution wasn’t over, though; producer Don Davis re-signed the Dramatics to the Stax subsidiary label Volt Records in 1971 after they’d teamed up with Motor City songwriter and producer Tony Hester. With Hester’s well-written, soulful songs in hand, the band’s wonderful vocal harmonies drove songs like “Whatcha See Is Whatcha Get, “In The Rain,” and “Fell For You” to the upper reaches of the R&B and pop charts.


The classic Dramatics line-up featured vocalists Ron Banks, William “Wee Gee” Howard, Elbert Wilkins, Willie Ford, and Larry “Squirrel” Demps, and that’s what you saw (and heard) on the band’s biggest hit, “Whatcha See Is Whatcha Get.” A molten slab o’ soulful wax, the May single release dominated the AM radio airwaves during the summer of ’71, its syncopated, Latin-tinged rhythms and vocal harmonies leading into an infectious chorus that blew out of your car speakers like a gale of fresh air. The song charted Top Ten (R&B and Pop) but its November follow-up – the Afro-Cuban flavored “Get Up and Get Down” – fared less well commercially. An underrated entry in the Dramatics’ singles catalog, the song evinces a sly, funky groove and vocals that remind of Curtis Mayfield via the Four Tops. “Get Up and Get Down” was a rhythmic dance-floor foot-shuffler with symphonic strains that should have performed much better on the charts than it did (#16 R&B, #78 Pop).

By contrast, “In The Rain,” which followed in February 1972, became the Dramatics’ only R&B chart-topper (and achieved a respectable #5 position on the Pop chart). A moody, ambient ballad with a gorgeous instrumentation and a heady bass line to anchor the whimsical, bluesy lyrics it displayed a facet of the band that differed from their preceding singles. “Hey You! Get Off My Mountain” was a mid-tempo ballad with session pro Dennis Coffey’s filigree guitar licks, haunting harmony vocals that made good use of all the singers’ ranges, and an explosive chorus that helped drive the song to #5 on the R&B chart (#43 Pop). The single’s B-side, “The Devil Is Dope,” is a scorching anti-drug creed reminiscent of the Temptations, the song’s memorable chorus and orchestral scoring providing a larger-than-life feel to the song. Drenched in soul but offering gospel and rock undertones, “The Devil Is Dope” would have made for a strong single release on its own.

The Dramatics’ very first single for Stax – “Your Love Was Strange” – shoulda, coulda been a smash when it was released in October 1969. Showing a clear evolution of the band towards its popular ‘70s-era sound, the song is deep-fried in Motown production technique with obvious Temptations-inspired harmonies (something the band largely moved away from as they developed their own vocal magic), a minor up-tempo rhythm and singing strings. It’s a strong performance, slightly derivative but not much more than anything else on the radio in 1969. Released in August 1973, “Fell For You” would be the band’s last R&B chart hit for Volt/Stax, peaking at #5 while hanging around at #45 on the Pop chart. A low-key ballad with some impressive vocal gymnastics, producer Hester took full advantage of the band’s vocal abilities on the recording. The B-side to “In The Rain,” the uplifting “Gimme Some (Good Soul Music)” is a textbook example of fine pop songwriting with a soulful performance, the band’s soaring vocals wrapping around an inspirational lyrical message in what could have been another monster AM radio hit if it had been released as a solo single.


This budget-priced Stax Classics set pulls its material mostly from the Dramatics’ Top 20 hit album Whatcha See Is Whatcha Get, but also includes a number of other minor hit singles and rare B-sides from their Stax/Volt tenure. The band only hung around Memphis for three quick studio albums and a live set circa 1971 to 1974 before jumping ship from Stax to ABC Records and, later, MCA Records, where they enjoyed modest success as they incorporated disco moves into their sleek soul music. If only for their timeless early ‘70s hits, the Dramatics’ Stax Classics is worth your time and a little bit of money for a whole lot of great soul music. Grade: B+ (Stax Records, released May 19, 2017)

Buy the CD from Amazon.com: The Dramatics’ Stax Classics