Rock legends Jane’s Addiction released its groundbreaking, earth-shaking sophomore album Ritual de lo Habitual back in the early alt-rock daze of 1990 (damn, has it really been that long ago?). The album continues to pick up new fans better than a quarter-century after its release, so it’s only fitting that the band should revisit the trailblazing recording in a live setting.

On August 4th, 2017 Rock Fuel Media, in association with Sonic Films, Cleopatra Records, and MVD Entertainment Group, will release Ritual de lo Habitual Alive at 25 on DVD and Blu-ray disc as well as on CD and vinyl LP. Directed by Mark Ritchie and produced by Barry Summers of Rock Fuel Media, Jane’s Addiction - Ritual de lo Habitual Alive at 25 documents a September 2016 concert filmed at the Irvine Meadows Amphitheatre, the last stop on the band’s 20-city “Sterling Spoon Anniversary Tour.” The concert was filmed with 20 cameras spread across the venue and mixed in 5.1 Surround Sound. 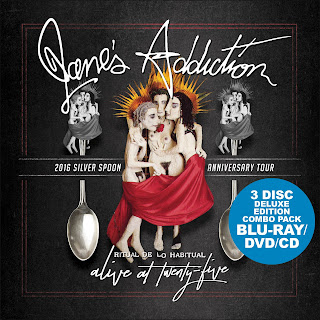 Featuring classic Jane’s Addiction line-up of frontman Perry Farrell, guitarist Dave Navarro, bassist Chris Chaney, and drummer Stephen Perkins, the band performed a 90-minute show which included their entire Ritual de lo Habitual album along with hits from across the band’s 30-year career. In a press release for the video and album Farrell says “25 years – what a beautiful milestone for both Ritual de lo Habitual and Lollapalooza. As both were great achievements in our lives that also helped change the course of music history, we really sought to come up with a special show for this tour so that the fans could celebrate it with us.”

Producer Barry Summers of Rock Fuel Media adds, “The band’s great visual and very edgy performances always kick ass on stage. Ritual de lo Habitual is such an iconic album that changed the landscape of alternative rock that we wanted to capture the 25 year anniversary in stunning 4k. It’s quite mind-blowing and we think fans will enjoy this package for years to come.” Rock Fuel Media is an award-winning, full-service film and television production company specializing in multimedia content distribution. The company has worked with a diverse range of artists, including Guns N’ Roses, Lynyrd Skynyrd, Elvis Costello, Melissa Etheridge, the Beach Boys, Bonnie Raitt, and many others.