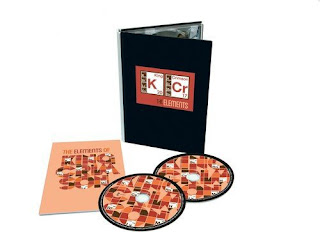 If you’re one of the thousands of loyal prog-rock fans that have been enjoying the legendary King Crimson’s recent slate of shows, this news will make your month! This coming Friday – June 16th, 2017 – the band will release The Elements of King Crimson 2017 Tour Box. Like its predecessors from the past three years, the two-disc set features extracts from rehearsals, new live recordings, elements from studio recordings, full tracks, alternate takes, and finished recordings circa 1969 to 2016, many of which are making their first appearance on CD.

Every line-up of the historic band is represented on The Elements of King Crimson 2017 Tour Box, and the set includes a unique performance of “Lark’s Tongues In Aspic” comprised of studio and live tracks interspersed with elements taken from the original studio sessions and rehearsals. The set is packaged in a DVD-sized fold-out digipak-style book case with a 24-page booklet that includes photos of memorabilia, band photos, full info about the 2016 tour, and new liner notes by co-compiler Sid Smith. The Elements of King Crimson 2017 Tour Box can be ordered from King Crimson’s Schizoid shop or from Amazon.com using the link provided below.

The King Crimson 2017 North American tour continues through the end of July – check out tour dates here – and the band has taken the unusual step of placing its three drummers at the front of the stage. In addition to beat-keepers Pat Mastelotto, Gavin Harrison, and Jeremy Stacey, this incarnation of King Crimson includes multi-instrumentalist Bill Reiflin on keyboards, guitarist Jakko Jakszyk, bassist Tony Levin, saxophonist Mel Collins and, of course, band founding member Robert Fripp on guitar.

Buy the CD from Amazon.com: King Crimson’s The Elements of King Crimson 2017 Tour Box
Posted by Rev. Keith A. Gordon at Wednesday, June 14, 2017