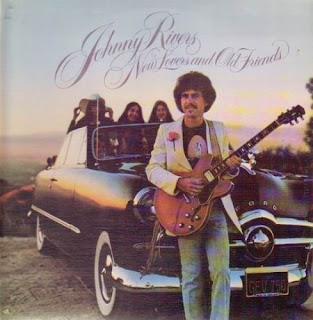 Rock music, like any other aspect of culture, seems to run in vicious cycles. With its roots in simplicity, rock music was born with a main purpose in mind: for fun. It was something youngsters could identify with, something their parents didn’t understand. And today, with styles of rock ranging from the pleasant twanging of country-oriented rock, right up to the heavy, metallic boredom present in the music of many modern groups, it sure is nice to find someone who presents us with simple, honest music. Such a performer is Johnny Rivers.

New Lovers and Old Friends is a collection of honest rock music, some old, some new. The tunes are simple, ranging from fun-time rockers to heavy ballads. And most important of all: the album doesn’t dose out heavy overproduction or extended boredom. “It’s The Same Old Song,” a Holland-Dozier-Holland tune, starts the album off. It leads into the single and Beach Boys classic “Help Me Rhonda” (with Brian Wilson on backing vocals). Just this much makes one remember summers spent on the beach, basic good times. The rest of side one is pretty soft, ballad material like “Can I Change My Mind.”

Side two begins with the title cut and leads into “Dancing In The Moonlight,” a minor hit for an unknown group. But Rivers conjures up images, his voice complimented by the guitarwork. The rest of the album rocks to the finish, leaving the listener immersed knee-deep in rock ‘n’ roll soul. New Lovers and Old Friends isn’t loud, nor is it boring What it is, is a journey to the past, to rock ‘n’ roll memories unforgotten...and fun. (Epic Records, released 1975)

Editor’s Note: In the pre-Internet dark ages, it was difficult to look up information like the fact that “Dancing In The Moonlight” was a #13 charting single in 1972 for the band King Harvest. Also, guitars on New Lovers and Old Friends were provided by the great Larry Carlton and Ned Doheny.