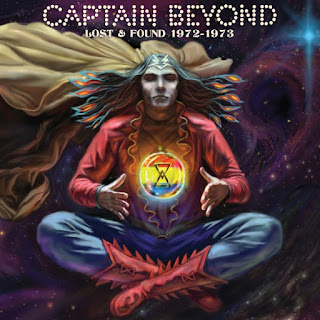 The groundbreaking sound of ‘70s-era cult band Captain Beyond was one part space rock and one part prog, with a dash of guitar-heavy hard rock thrown in for good measure. Captain Beyond was formed in 1971 by original Deep Purple vocalist Rod Evans with guitarist Larry “Rhino” Reinhardt and bassist Lee Dorman of Iron Butterfly, and drummer Bobby Caldwell from Johnny Winter’s band. The original Captain Beyond line-up also included keyboardist Lewie Gold, who left the fold before the band’s first album and would later be temporarily replaced by Reese Wynans (Stevie Ray Vaughan’s Double Trouble).

With Reinhardt and Dorman serving as the band’s musical anchor, Captain Beyond released three early-to-mid-‘70s albums with different line-ups that would prove wildly influential beyond their meager commercial achievements: Captain Beyond (1972), Sufficiently Breathless (1973), and the reunion album, Dawn Explosion (1977), recorded with singer Willy Daffern. The band’s first two LPs were released by Capricorn Records, a label best known for its association with Southern rock. But legend has it that Allman Brothers Band guitarist Duane Allman was so impressed by Captain Beyond’s demo tape that he convinced the label to sign the unique outfit.

That original Captain Beyond demo tape was lost to the ages until recently discovered by longtime band drummer Bobby Caldwell. Those original performances have recently been released by Purple Pyramid Records, a Cleopatra Records imprint, as Lost & Found 1972-1973 on both CD and as a special, limited edition red-colored vinyl album. The album documents the original versions of band favorites like “I Can’t Feel Nothing” and “Dancing Madly Backwards” as well as the previously-unreleased track “Uranus Expressway.” The set also includes lengthy liner notes by noted music historian and rock critic Dave Thompson.

Original Captain Beyond vocalist Rod Evans left the band after the release of Sufficiently Breathless and literally disappeared from the industry (really…nobody knows where Evans is and, if they do know, they ain’t talkin’…). After the band’s late ‘70s break-up, Reinhardt and Caldwell reunited in 1998 as Captain Beyond and toured for five years, disbanding in 2003 when Rhino developed cancer; the guitarist later passed away in 2012. Caldwell once again resurrected the band in 2013 and has scheduled a short tour in support of Lost & Found (dates below). In their prime, Captain Beyond was a powerful, innovative, and entertaining band that left its mark. Lost & Found provides yet another chapter in the story of this obscure, albeit influential band.