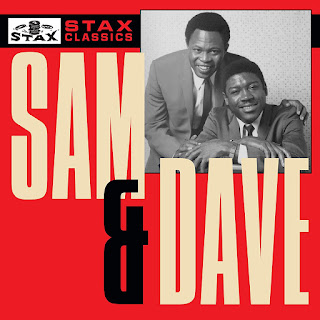 The duo of Sam & Dave stood out even amidst a stable of talent as diverse and legendary as that blessed upon Stax Records in Memphis, Tennessee. The legendary R&B duo of Sam Moore and Dave Prater performed together for two decades, from 1961 to 1981, delivering a string of hits that were influential far beyond their chart success. The pair struggled through their early days, and couldn’t buy a hit until they were signed to Atlantic Records by producer and A&R man Jerry Wexler. Sensing their potential, Wexler sent them to Memphis to record for the Stax label, which was distributed by Atlantic at the time.

Wexler’s largesse was pure genius. While at Stax Records, Sam & Dave largely performed material penned by the in-house songwriting team of Dave Porter and Isaac Hayes. This partnership would result in ten consecutive Top 20 R&B chart singles and three Top 10 albums for Sam & Dave, as well as lucrative “crossover” success as the duo made thirteen straight appearances on the pop chart as well as two Top 10 singles. They also helped popularize soul music with white audiences and, in doing so, created an indelible musical legacy that persists to this day. Sam & Dave songs have been recorded by artists as diverse as ZZ Top, the Fabulous Thunderbirds, Aretha Franklin, Elvis Costello, Bonnie Raitt, and the Temptations, among many others.


As part of Stax Records’ 60th anniversary celebration, the label is revisiting its legendary hitmakers with new CD/LP/digital collections under the Stax Classics banner. Sam & Dave’s Stax Classics opens, appropriately, with the pair’s first Top 20 pop hit, 1966’s “Hold On! I’m Comin’,” which was also their first R&B chart-topper for the Memphis label. With deliciously rowdy vocals soaring above deep rhythms, it’s the ‘go to’ song for many Sam & Dave fans. Better known, perhaps, is their enduring signature song, 1967’s “Soul Man,” also written by Hayes and Porter and featuring an infectious, sing-a-long chorus, brassy horns, and some funky pickin’ by Col. Steve Cropper. Their second chart-topping R&B hit, “Soul Man” narrowly missed dominating the pop world as well, peaking at a respectable #2 on the pop chart. The last of the duo’s trio of larger-than-life hits, 1968’s “I Thank You” evinces a sly funky groove that would subsequently inspire everybody from George Clinton to Sly Stone in the years to follow. “I Thank You” was also a Top 10 pop hit would peak at #4 on the R&B chart.

There’s more to Sam & Dave than those three hits, however, some of the best of which is showcased on Stax Classics. Their cover of Sam Cooke’s “Soothe Me” breathes new life into an obscure track with an enchanting performance that succeeded artistically if not commercially (it was only a modest hit). Sandwiched in between their big hits, 1965’s “You Don’t Know Like I Know” offers a uniquely Sam & Dave spin on what could have been a Motown hit while the soul classic “I Can’t Stand Up For Falling Down” is provided a bluesy, almost gospel fervor that would later inspire Elvis Costello to cover the song. With a loping groove, piano tinkling, and a heavy bass line, “You Got Me Hummin’” juxtaposes the two singer’s voices against each other to great effect as the horns punctuate the song’s mesmerizing rhythm. The album-closing “I Take What I Want” mimics the Ray Charles’ hit “I Don’t Need No Doctor” with its strident rhythms but Sam & Dave take it up a notch with a subtle albeit strong vocal performance dancing atop a surging guitar riff.


There have been a lot of variations on a Sam & Dave “greatest hits” compilation released through the years, including 2009’s sixteen-track The Very Best of Sam & Dave album and the one that the Reverend originally bought back in the day, 1981’s twenty-one track The Best of Sam & Dave, both of which are still available if you look hard enough. The budget-priced Stax Classics does a fine job of distilling the duo’s immense legacy to a lean ‘n’ mean twelve tracks, however, offering crystalline remastered sound and fresh, informative liner notes for both the newcomer and longtime fan. This is soul music at its very best, excellently performed by the legendary duo of Sam & Dave. Grade: A (Stax Records/Rhino Records, released May 19, 2017)