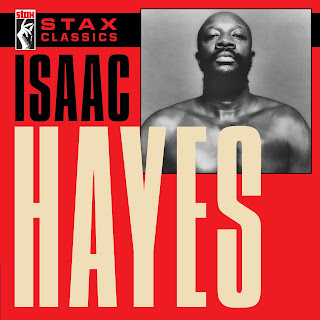 To an entire generation of young ‘uns, Isaac Hayes is best known as the voice of the popular character ‘Chef’ on the long-running TV series South Park. For us graybeards, however, we remember Hayes as one of the boldest and most innovative of the many talented singers, songwriters, and musicians to come out of the Stax Records hit factory in Memphis, Tennessee.

Hayes was much more, of course – he was a film actor (Hustle & Flow, Escape From New York) who also enjoyed various TV roles (The Rockford Files, Stargate SG-1, etc) – as well as a music producer, label executive (Hot Buttered Soul Records), and a humanitarian lauded for his work in Ghana. As a songwriter, often working with partner David Porter, Hayes wrote hits for a number of Stax artists including Sam & Dave (“Soul Man”), Carla Thomas (“B.A.B.Y.”), and Johnnie Taylor (“I’ve Got to Love Somebody’s Baby”), among others. During his lengthy career, Hayes won an Academy Award for his theme from the movie Shaft as well as a multiple Grammy® Awards.


For our intents and purposes here, we’re going to focus on Hayes’ contributions to our culture as a performer and songwriter, both of which are perfectly showcased by this Stax Classics collection. Featuring a dozen sizzling tracks culled from Hayes’ tenure as a Stax recording artist circa 1968-1973 and originally released by the Stax subsidiary Enterprise Records, the emphasis here is on Hayes’ success as a singles artist but it also includes a few of his longer, complex, and ground-breaking album tracks. Stax Classics leads off with “Theme from Shaft,” which has become Hayes’ signature song; a muscular blend of funky grooves, thrilling wah-wah guitar licks, and cinematic storytelling, the song also displays Hayes’ proclivity towards orchestrating his music with lush tones and colors. The song was Hayes’ biggest hit, hitting #1 on the pop chart while only rising to #2 on the R&B chart.

Hayes’ 1969 album Hot Buttered Soul – considered a classic of American soul – offered up only four songs, including lengthy jams on Burt Bacharach’s “Walk On By” and Jimmy Webb’s “By the Time I Get To Phoenix” that ran 12 and 18 minutes, respectively, and featured incredible instrumental flights of fancy. Hayes recorded “Walk On By” only a few years after singer Dionne Warwick had scored a #6 chart hit with the song, but his imaginative take earned him a Top 30 single nonetheless. “By the Time I Get To Phoenix” fared slightly less well commercially, but still went Top 40; his Stax Classics offers the truncated single edits of both songs, which still sound great even in shorter form. The Jackson 5 hit “Never Can Say Goodbye,” taken from Hayes’ other bona fide classic, 1971’s Black Moses, is slowed down and dressed up with a dreamy soundtrack and wistful, yearning vocals that would drive the song to #22 on the pop chart and the album to Top 10 status.

Hayes’ original “Do Your Thing” is a master class in ‘70s-era funk, the Top 30 charting pop hit offering shimmering horns, Hayes’ fluid baritone vocals, and a groove so damn tasty it’s like drinking hot sauce straight from the bottle. Stax Classics offers more than the just the chart hits, though, allowing the raucous, funky original tune “Hyperbolicsyllabicsesquedalymistic” (from Hot Buttered Soul) to run its full, nearly-ten-minute jaw-dropping album length. If the song doesn’t get your feet shuffling, then you’ve probably assumed room temperature while listening to the album. The instrumental track “Run Fay Run,” from the soundtrack of the 1974 Blaxploitation film Tough Guys for which Hayes wrote the score and co-starred in, is another delightful slice of cinematic soul with brilliant washes of instrumentation and pulse-quickening rhythms while “Soulsville,” from the 1971 soundtrack album Shaft, is an anything-but-traditional R&B tune that showcases Hayes’ soaring vocals and delicate touch on what is an intelligent, socially-conscious story-song.


Released as part of Stax Records’ 60th anniversary celebration, the Stax Classics series highlights some the label’s biggest stars from the 1960s and ‘70s, each budget-priced album offering a dozen songs that transcend the obvious hits to provide a more balanced portrait of the individual artist’s talents. The Isaac Hayes’ edition of Stax Classics does a great job in portraying all the many facets of this talented, pioneering, legendary artist, Hayes’ influence extending far beyond the world of R&B to such diverse artists as Prince and Henry Rollins. For newcomers, Stax Classics provides a heady introduction to Hayes’ charms, and if it prompts listeners to pick up copies of Hot Buttered Soul or Black Moses, so much the better… Grade: A (Stax Records, released May 19, 2017)