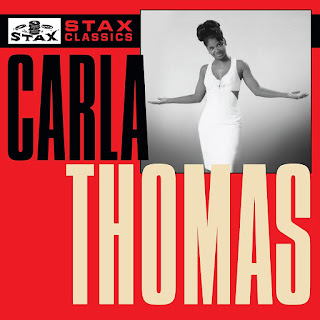 Widely known as the “Queen of Memphis Soul,” singer Carla Thomas was born into Memphis music royalty. The daughter of local music institution Rufus Thomas – a popular and talented Bluff City deejay, comedian, and singer who recorded for labels like Chess, Sun, and Stax Records – Carla was one of three musical siblings, including singer Vaneese Thomas and keyboardist Marvell Thomas. A member of Memphis’ Teen Town Singers (which also once included Isaac Hayes), Thomas sang with the group from the age of ten until she graduated from high school.

At the age of eighteen, Thomas recorded her first single – a 1960 duet with her father titled “Cause I Love You” – released by producer Jim Stewart’s pre-Stax label Satellite Records. She would subsequently become one of the fledgling Stax label’s biggest stars, scoring some 18 R&B chart hits circa 1960-1969, occasionally crossing over to the pop charts and taking her place as arguably the best soul singer, male or female, that Memphis had to offer. The budget-priced Stax Classics offers up a dozen fine Thomas performances, mixing (most of) her chart hits with some obscure album tracks to showcase the underrated singer’s enormous voice and talent.


Carla Thomas’s Stax catalog comprises a mere six albums, but it was with those little 7” vinyl flapjacks where her talents truly shined. There were hard choices to be made, I’m sure, in what to include and what to exclude when piecing together Thomas’s Stax Classics collection, but in the end the producers assembled a fairly representative (and entertaining) twelve tracks. Thomas’s Stax Classics set opens with “B-A-B-Y,” the singer’s biggest and most enduring hit (#3 R&B, #14 Pop), and a perfect vocal showcase. There’s an innocence and youthful energy at play on the side (Thomas would have been only 24 years old when it was released), but also a knowing, sensual purr that is emphasized by the judicious use of Stax’s horn players.

Thomas and Otis Redding were the biggest-selling female and male artists on the label’s roster so somebody (OK, probably Stax main man Jim Stewart) had the bright idea of having the two talented singers wax an album of duets like those which Motown’s Marvin Gaye had so much success with at the time. “Tramp” was a Top 30 hit single off the 1967 album King & Queen, the song a lively call-and-response between the two singers that is playfully argumentative as Thomas and Redding talk-sing a humorous, melodramatic tale. Sadly, Stax Classics doesn’t include either of the other two Thomas/Redding hits from that album (including a scorching take on “Knock On Wood”), but since the label is reissuing King & Queen on vinyl this summer, I’ll forgive them.


The collection also includes “Cause I Love You,” Thomas’s duet recorded with her father Rufus which didn’t chart, but is a gem nonetheless. The teenaged Carla’s soulful vocals were nearly fully-formed and offer a sweet counterpoint to her dad’s gruff but affectionate singing. The song doesn’t feature a strong melodic hook, but it does offer a fine foot-shuffling rhythmic line. “I Like What You’re Doing (To Me)” is one of Thomas’s most underrated releases, the 1969 single displaying a fuller range of the singer’s voice and her ability to inject emotion into even the most rote of lyrics. The ballad “Comfort Me” went absolutely nowhere when released in 1965 tho’ I can’t imagine why. Standing proudly on the fine line between classic R&B and pop-influenced early rock ‘n’ roll, Thomas delivers a wonderful vocal performance amidst the crooning backing vocal harmonies and swells of instrumentation.

The Isaac Hayes/David Porter collaboration “When Tomorrow Comes” is another such soul-pop hybrid with lush instrumentation supporting Thomas’s soaring vocals. Although the song crept onto the pop chart at #99 in 1967, it could have been a huge hit if it had received significant airplay on mainstream AM radio. Released later that year, “Pick Up the Pieces” is what we would consider “classic soul” these days, Thomas knocking out another powerful mid-tempo ballad, her vocals flying high above crescendos of orchestration and an undeniable melody. An obscure album track from 1965, “I’ve Got No Time To Lose” shows Carla in Irma Thomas (no relation) mode, belting out the lyrics with strength and feeling that fuses contemporary ‘60s soul with gospel fervor. Thomas’s edition of Stax Classics closes out with the 1969 track “I Play For Keeps,” the song’s overall vibe similar, musically, to the sound that the Fifth Dimension was scoring hits with at the time. Strip away all of the gratuitous strings and instrumentation, though, and you’ll find a lovely soul-pop performance with Thomas’s magnificent voice front and center.


After the release of her final Stax album, 1971’s Love Means… and an appearance in the 1972 Wattstax film, Thomas largely turned her energy away from chasing hits and towards improving her community. Although the singer toured every now and then during the 1980s, her work with the “Artists in the Schools” program allowed her to inspire Memphis teenagers, earning Thomas a prestigious ‘Pioneer Award’ from the Rhythm & Blues Foundation, an honor that placed the singer in the company of fellow R&B and soul legends like James Brown and Solomon Burke.

Carla Thomas’s Stax Classics entry is one of the strongest in the series, showcasing the singer’s dynamic voice and charisma over the course of a dozen songs. However, I’ve knocked a point off the grade for one major omission – the lack of Thomas’s first big hit, 1960’s “Gee Whiz (Look At His Eyes),” which was released by Stewart’s Satellite Records label and distributed by Atlantic Records. Peaking at #5 on the R&B chart and #10 pop, the song helped put Thomas on the map and led directly to her subsequent string of hits for the Stax label. If you can include “Cause I Love You,” which is of a similar vintage, then you have to include “Gee Whiz.” Nevertheless, Thomas’s Stax Classics is a treasure of mid-to-late ‘60s soul and pop performances that is available on CD for a pittance. The Rev sez “check it out!” Grade: B+ (Stax Records, released May 19, 2017)