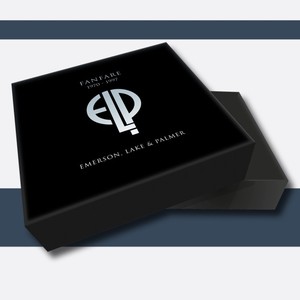 The Reverend tends to take a dim view of a lot of the recent box set fare released by cash-hungry major labels looking to fleece an artist’s hardcore fans for one last ride on the merry-go-round. Although there are a handful of dedicated reissue labels performing a public service in rescuing the work of obscure artists from the scrap-heap of history with finely-curated deluxe boxes (Omnivore Recordings, I’m looking at you…), much of what you’re putting up a C-note or two for these days is a rehash of music that you already own...

That being said, everybody’s favorite rock ‘n’ roll padre is going gaga over the recently-announced Emerson, Lake & Palmer box set. Titled Fanfare 1970-1997, and scheduled for September 29th, 2017 release, the limited-edition numbered Fanfare 1970-1997 box offers a lot for both the grizzled original ELP fan as well as the rookie just now climbing on the prog-rock bandwagon. First of all, the box contains remastered CD versions of all eleven ELP albums with original sleeve artwork, from the band’s 1970 self-titled debut to their underrated 1994 swansong, In The Hot Seat, and every note in between.

As they used to say on those old K-Tel TV commercials, “that’s not all!” The box also includes a previously unreleased live triple-vinyl album with May 1973 performances from Milan and Rome, Italy. Throw in five previously-unreleased live CDs mastered by engineers Andy Pearce and Matt Wortham, including Live At Pocono International Raceway (1972), Live At Waterloo Concert Field (1992), Live At Birmingham Symphony Hall (1992), On the BBC (including a 1979 performance on The Old Grey Whistle Test and a 1993 performance on Pop Goes Summer), and Live At Élysée Montmartre (1997) and you have one hell of a box set.

“Wait a minute, there’s still more!” sez Rev. Pompeil…Fanfare 1970-1997 includes an audio Blu-ray disc with stereo 5:1 and surround sound mixes of the first four ELP albums by Porcupine Tree’s Steven Wilson (Emerson, Lake & Palmer and Tarkus) and King Crimson’s Jakko Jakszyk (Trilogy and Brain Salad Surgery). Add a pair of remastered 7” singles – “Lucky Man” b/w “Knife-Edge” (1970) and “Fanfare For The Common Man” b/w “Brain Salad Surgery” (1977) – with reproduced original sleeve artwork, throw in a metal & enamel ELP logo pin badge, reprinted original 1970 promo poster and 1972 promo brochure and 1974 and 1992 tour programs and top it off with a deluxe 12” hardback book with rare band photos and extensive notes by acclaimed British music journalist Chris Welch with quotes from Keith Emerson, Greg Lake, and Carl Palmer and I think that even the most reluctant progger would agree that Fanfare 1970-1997 offers a lot of value for the pre-order price of $152 (plus shipping).

And yes, the Rev does believe the hype and I’ve already ordered my copy of Fanfare 1970-1997, which earned me a previously-unreleased CD with the rough album mixes for Black Moon, something truly for the obsessive ELP fan. Still, we’ve recently lost both Keith Emerson and Greg Lake, and although ELP has taken a lot of grief through the years for their pomposity and the over-the-top nature of the band’s music, they continue to drag young new fans in by the truckload. You can get your very own copy of Fanfare 1970-1997 via the band’s website.