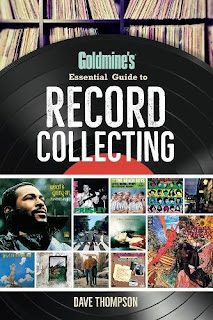 For better than 40 years now, Goldmine magazine has been the go-to publication for record collectors, music fanatics, and fellow travelers. Back in the pre-Internet good old days, the zine was an oversized behemoth constructed of durable newsprint, its pages jam-packed with ads from various vinyl vendors. Some were selling albums and 45s outright for a set cost while other advertisers ran auctions that required the interested party to send their bid by U.S. mail and wait, patiently, for a month (sometimes two) to find out if you were the lucky soul to win the auction and, by the way, where’s my money?

These Goldmine ads, often in migraine-inducing type sizes, provided a valuable education for those of us interested in the minutiae of obscure doo-wop singles, psychedelic rock albums, and other musical flotsam and jetsam. Each issue of the zine also featured well-written artist interviews and album reviews (a few of which I penned) that easily stood shoulder-to-shoulder in quality with mainstream music rags like Rolling Stone, Spin, and Creem, et al. Goldmine is still published monthly and while many of the auction advertisers have fled for Discogs or eBay, a few remain, and the zine’s music coverage is still top notch, featuring writers like my old buddy Martin Popoff, Gillian Gaar, Bill Kopp, Lee Zimmerman, and the ‘Mack Daddy’ of them all, Dave Thompson.


In the interest of full disclosure, Thompson was briefly an editor of mine a number of years ago at an obscure Midwestern zine with a focus on, shall we say, the ‘seedier’ side of the music biz. That colors my opinion of his brilliance not a whit, and many other readers must agree. The man is prolific in a manner that puts even Mr. Popoff to shame, Thompson having written over 100 music-related books (several of which I’ve read); he’s also a well-respected pricing expert for a wide range of vinyl records, writing both The Standard Catalog of American Records and the Goldmine Jazz Album Price Guide. In other words, Thompson knows his stuff and he isn’t going to steer you wrong.

Thompson’s latest contribution to the record-collecting hobby/obsession is the nifty, informative Goldmine’s Essential Guide to Record Collecting. Now the Reverend, I’m not so much a collector as a ‘hunter and gatherer’…I’ve probably sold as many records and CDs as I currently own through the years, and my own reckless and eclectic musical tastes have caused me to constantly hone my collection to fit my mood at any given moment, resulting in a permanent library of a few thousand items. I’ve always been more into the music than the value of the medium, which is why I once sold a collectible promotional copy of a Bob Marley & the Wailers box set on eBay for $100+ and invested the money in several different Marley albums instead.


I certainly understand the addictive qualities of record collecting, however, and with vinyl making a long overdue ‘comeback’ due to a generation of fresh-faced music fans, even the Reverend hasn’t been able to resist the lure of a recent Buzzcocks bootleg LP reissue, a Redd Kross rarities collection on gray vinyl, or almost anything from the Third Man Records “live” in the studio series. So while I’m an old hand at buying, selling, and trading records, I nevertheless found Thompson’s work on Goldmine’s Essential Guide to Record Collecting to be an interesting and informative read no matter one’s level of collecting knowledge. Thompson starts out with a couple of chapters on the birth and evolution of vinyl, ‘cause it always helps to know where you’ve been so you can tell where you’re going. A chapter on vinyl grading is essential to the hobby, and Thompson provides valuable examples of how condition can mess with the value of a record.

From this point, Thompson gets into the ‘meat and potatoes’ of the hobby, discussing the ever-collectible Beatles and Stones, dipping into jazz and box sets, and sojourning into the ancient past to talk about the almighty Elvis and other early-era rockers like Jerry Lee Lewis and Gene Vincent. Thompson hits many of the touchstones of the collectors’ community, artists like Bob Dylan and David Bowie and record labels like Motown, as well as providing a chapter on the highly-collectible and often pricey field of psychedelia. He spends much more time on disco than I certainly would have – who knew that old 12” disco biscuits were collectible – but Thompson redeems himself with a solid chapter on pub rock and punk. Chapters on the music of the ‘80s and classical music round out the guide, which is profusely-illustrated with artist photos, album covers, 45rpm picture sleeves, and poster art. Frequent sidebars offer a glimpse at current pricing on rarities like “rare blues from the shellac age” 78s and Elvis’s Sun Records releases and more.


Overall, the 240 pages of Goldmine’s Essential Guide to Record Collecting provide an informative primer for the veteran and newcomer alike. I do have a few minor complaints, however – classic blues music from the 1950s and ‘60s is given short shrift, as is old-school hip-hop, which is easily as popular with collectors as disco. An entire chapter on fan favorites like Bruce Springsteen, Prince, Fleetwood Mac, etc would have been nice – rabid fans of those artists will buy anything, and there’s certainly a lot to buy – but then the book would have run in excess of 300 pages, I suppose.

As it is, Goldmine’s Essential Guide to Record Collecting provides an excellent blueprint to the hobby, written in Thompson’s usual friendly but knowledgeable style. With Thompson’s considered advice and a pocket full of cash, one can put together an impressive and satisfying record collection in no time.  Grade: A- (Krause Publications, published June 29, 2017)

Buy the book from Amazon.com: Goldmine’s Essential Guide to Record Collecting by Dave Thompson
Posted by Rev. Keith A. Gordon at Sunday, July 09, 2017