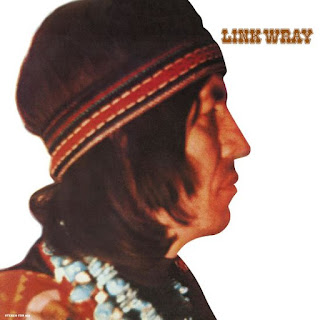 The legendary Link Wray hadn’t released an album in nearly eight years when a self-titled LP appeared on record store shelves in June 1971, released by Polydor Records. Featuring a stark photo of Wray clad in native Shawnee Indian garb on the front cover in honor of his Native American roots, the collection can best be characterized as what we’d call ‘Americana’ these days, the mostly-original songs an inspired blend of roots-rock, blues, country, and folk music.

On July 28th, 2017 Future Days Recordings – a Light In The Attic imprint – will reissue Wray’s Link Wray for the first time on vinyl since the early ‘70s on both standard black vinyl and as a limited, 400-copy edition on “Juke Box Mama Gold” wax. The album has been newly remastered, includes new liner notes by Chris Morris, and is packaged in a reproduction of the original die-cut album gatefold jacket.

Link Wray, the album, was recorded by the guitarist in a makeshift three-track studio slapped together in a chicken shack on his brother Ray’s property in rural Maryland that was dubbed ‘Wray’s Shack Three Track’. Wray was backed on the songs by pianists Bobby Howard and Bill Hodges and drummers Doug Wray and Steve Verroca, who co-wrote several songs and co-produced the album with Ray. Recording in as primitive of conditions as one could conceive, Wray was defiantly shrugging aside the slick production of contemporary records in favor of a raw, simpler sound. 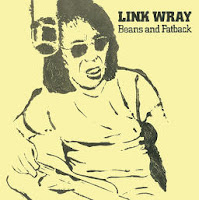 Featuring Wray’s ramshackle vocals – he’d lost a lung to TB while serving during the Korean War – and his trademark high-flying fretwork, the album eschewed the guitar-driven instrumentals like “Rumble” and “Rawhide” on which he’d built his reputation in the 1950s and ‘60s. The move didn’t win Wray many new fans, and it alienated many of his old listeners. Nevertheless, the album has since been reconsidered as a minor classic of pioneering Americana music, with several semi-biographical songs penned by Wray like “Fire and Brimstone” and “Fallin’ Rain” later covered by artists as diverse as the Neville Brothers, Nick Cave, and Calexico.

To accompany the vinyl release of Link Wray, Light In The Attic is also distributing three other albums of a similar vintage by the guitarist that have been reissued by Tidal Waves Music. Also recorded at Wray’s Shack Three Track, 1971’s Mordicai Jones (a pseudonym for pianist Bobby Howard) and Beans and Fatback (released in ’73) are available from LITA as is 1972’s Be What You Want. All four vinyl albums are also available in a budget-minded bundle from the Light In The Attic Records website.