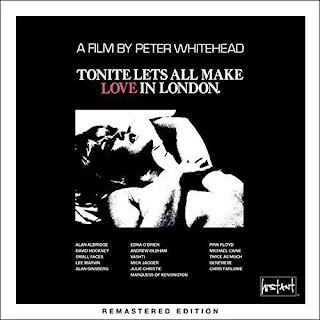 By 1967, British director Peter Whitehead was building a reputation as a documentary filmmaker with an eye on youth culture. His short 1965 film Wholly Communion featured footage shot at the International Poetry Incarnation in London with readings by Beat poets from both sides of the pond like Allen Ginsberg, Gregory Corso, Michael Horovitz, and Lawrence Ferlinghetti, among many others. The event drew an estimated audience of 7,000 people and is credited with jump-starting the British literary underground during the 1960s.

Whitehead followed the modest success of Wholly Communion with his 1966 film Charlie Is My Darling, which was produced by Rolling Stones manager Andrew Loog Oldham. Initially intended as a sort of ‘screen’ test for the band, video footage was shot during the Stones’ second tour of Ireland in September 1965 and premiered at the Mannheim Film Festival in Germany in October 1966. The film was not released commercially at the time due to a legal brouhaha between the Stones and Allen Klein, and all prints disappeared during a subsequent burglary in Oldham’s office. The film footage would reappear in the early 2000s when rediscovered by American director Mick Gochanour, who pieced together the 2012 release Charlie Is My Darling – Ireland 1965, sharing the director’s credit with Whitehead.


Undaunted, Whitehead dove headfirst into what would become his signature film – Tonite Lets All Make Love In London – a journey into the heart of ‘swinging ‘60s’ London. Combining live performances by Pink Floyd and the Rolling Stones with interview footage of U.K. celebrities like John Lennon and Yoko Ono, Mick Jagger, Vanessa Redgrave, Julie Christie, Allen Ginsberg, Michael Caine, and others, the film captured the zeitgeist of London circa 1967. Due to Whitehead’s association with Andrew Loog Oldham, the film’s original soundtrack album was released on the impresario’s Instant Records imprint, a subsidiary of Oldham’s legendary Immediate Records label.

In celebration of the film’s 50th anniversary, Charly Records UK has reissued the soundtrack for Tonite Lets All Make Love In London on CD, bringing the long out-of-print album into the modern era for the first time in over two decades. The film’s soundtrack is an odd bird, to be sure – part fish and part fowl as one might say – mixing songs by Pink Floyd, rock ‘n’ blues singer Chris Farlowe, folkie Vashti Bunyan, and the Small Faces (all Immediate label artists) with spoken interviews with folks like actors Michael Caine and Julie Christie, Mick Jagger, pop artist David Hockney and, of course, Oldham himself, among others. The results are mixed, but usually entertaining.


As for the album’s music – the main reason you and I, dear reader, are both here – the Syd Barrett-era Pink Floyd performance of “Interstellar Overdrive” acts as the heart of the soundtrack, which is mostly comprised of previously-released Immediate label hits. Recorded over two sessions in January 1967 and paid for by Whitehead, the song offers a psychedelic-drenched glimpse at the band before the release of their debut album, The Piper at the Gates of Dawn. The all-too-brief three-minute snippet of the 17-minute performance of “Interstellar Overdrive” provides a rush of sonic ecstasy with brilliant ambiance matched by Barrett’s otherworldly guitar licks.

Chris Farlowe, a blue-eyed soul singer who made an early career out of Stones covers before moving on to jazz-rock pioneers Colosseum and, later, sonic terrorists Atomic Rooster, provides the other musical highlights here. His versions of “Out of Time” and “Paint It Black” – both big U.K. chart hits – are wonderfully sublime, Farlowe’s performances mixing Jagger’s soulfulness with the electricity of Tom Jones to forge a beautiful, original sound. The Small Faces’ “Here Comes The Nice” is a delightfully wry slab of winsome ‘60s pop while “The Changing of the Guard” by the Marquis of Kensington (a studio project of Kinks manager Robert Wace and producer Mike Leander) is a whimsical Ray Davies’ sound-alike. British folk singer/songwriter Vashti Bunyan’s ethereal “Winter Is Blue” and Twice As Much’s beautifully baroque “Night Time Girl” (the songwriting duo of Dave Skinner and Andrew Rose) are only available on the Tonite Lets All Make Love In London soundtrack.


Whitehead’s film captured perfectly London’s mid-to-late ‘60s apex as the center of art, fashion, and music on the world stage. Remastered from original master tapes found in the CBS vaults, the soundtrack for Tonite Lets All Make Love In London is an important artifact of a fleeting moment in pop culture history, its music and interviews (including Allen Ginsberg’s brilliant reading of his poem from which the film takes its name) offering a glimpse into the window of the increasingly-distant past.

Quintessentially British, this album would certainly appeal to any anglophile or collector of ‘60s-era ephemera, but it also offers some choice musical morsels for the rest of us. My only complaint is the exclusion of the full 17-minute performance of Pink Floyd’s “Interstellar Overdrive.” With the CD’s running time falling short of 40 minutes, it could have easily been tacked on. Still, with the movie itself seeing re-release later this year, Tonite Lets All Make Love In London is the soundtrack to an influential and entertaining era. It’s also one of the first steps in the restoration of the Immediate Records back catalog to CD this year by Charly Records UK, which ranks highly in my book. Grade: B+ (Charly Records UK, released June 2, 2017)

Thanx to Shindig! music zine, whose July 2017 article on Tonite Lets All Make Love In London provided a lot of valuable information for this review...

Buy the CD from Amazon.com: Tonite Lets All Make Love In London
Posted by Rev. Keith A. Gordon at Sunday, July 23, 2017