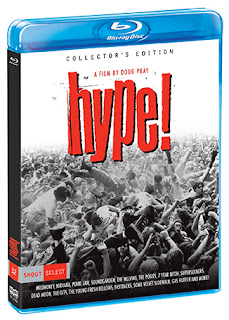 Filmmaker Doug Pray’s critically-acclaimed ‘rockumentary’ Hype! premiered at the Sundance Film Festival in January 1996 and was released to general audiences later that year. The film attempted to place the Seattle ‘grunge’ scene into proper context through on-camera interviews with those involved while poking gentle fun at an overly-enthusiastic music media that ‘hyped’ the scene to epic proportions. Among those interviewed by Pray for the documentary were members of rising stars Nirvana, Soundgarden, Pearl Jam, and Mudhoney as well as lesser-known bands like the Gits, the Melvins, Supersuckers, and the Fastbacks.

On September 29th, 2017 Shout! Factory will release Hype! for the first time on Blu-ray disc as well as updating the original DVD release for their Shout Select line. Hype! [Collector’s Edition] includes new audio commentary by director Pray, vintage interviews and performances, and cartoonist Peter Bagge’s animated short “Hate” as well as video outtakes and a new featurette with interviews with some of the original characters from the film 20 years later.

‘Grunge’ rose from the late ‘80s/early ‘90s rock scene in Pacific Northwest that was based in Seattle, Washington and exploded out of a vibrant local underground music scene on the strength of major label releases by Nirvana, Soundgarden, and Pearl Jam. Nirvana, arguably the scene’s best-selling band, hit #1 on the charts with their classic “Smells Like Teen Spirit” (and accompanying video, which received heavy airplay on MTV), opening the floodgates for dozens of bands like Seaweed, Flop, and 7 Year Bitch to sign deals as the major labels went on a ‘grunge’ feeding frenzy. While the top bands on the scene achieved multi-Platinum™ sales status and worldwide fame, many others scrapped by in the PNW and are known primarily by hardcore fans of the genre.

Hype! [Collector’s Edition] features rare performance footage of Soundgarden, Mudhoney, Pearl Jam, the Posies, Supersuckers, the Mono Men, the Fastbacks, the Gits, and the Young Fresh Fellows as well as the first live performance of “Smells Like Teen Spirit” by Nirvana. Aside from the wealth of band interviews the film provides, director Pray also included interviews important with behind-the-scenes movers and shakers like Sub Pop Records co-founders Jonathan Poneman and Bruce Pavitt, K Records founder Calvin Johnson, Empty Records founder Blake Wright, and many others. Hype! offers the definitive story of what was arguably the last great rock scene before major labels took control and diluted ‘grunge’ in the name of more marketable ‘alt-rock’.