CD Preview: Walter Trout’s We’re All In This Together 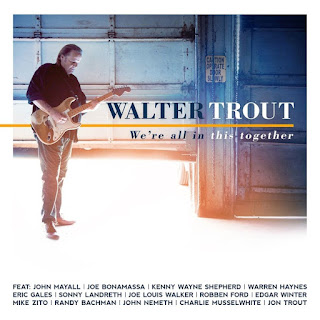 Blues-rock guitarist Walter Trout has been mighty busy since undergoing a life-saving liver transplant in late 2013. Whereas lesser musicians might have been tempted to hang up their running shoes, Trout was back on the road in early 2015 and has been touring ever since, performing with the fervor and energy of a man half his age. Somewhere along the way, Walter found time to chronicle his dance with the reaper on the brutally honest and musically-powerful 2015 album Battle Scars. He followed it up in 2016 with the equally impressive concert LP Alive In Amsterdam, a testament to his renewed effort as an ambassador for the blues.

I have the feeling that the talented Mr. Trout is really just getting started…on August 25th, 2017 Provogue Records will release the guitarist’s new studio album, We’re All In This Together, his 26th recording to date. With nearly a half-century of performing under his belt, Trout takes nothing for granted, and We’re All In This Together is filled with guest appearances from Walter’s friends and former bandmates like John Mayall, Joe Bonamassa, Sonny Landreth, Kenny Wayne Shepherd, Joe Louis Walker, Charlie Musselwhite, Edgar Winter, Mike Zito, and others. The album also showcases the talents of Trout’s son Jon, a talented string-bender in his own right who is beginning to give his old man a run for his money.

Unlike Trout’s previous (and critically-acclaimed) cameo-filled album, 2006’s Full Circle, the sequel-of-sorts We’re All In This Together pays tribute to his friends and collaborators as Trout wrote an original song for each one of his fourteen special guests to perform on. The material is less heavy in nature than his previous studio album, which is to be expected as Trout moves away from his trial by fire with a renewed sense of purpose. “Now was the right time for this record,” Trout says in a press release for the new album. “Battle Scars was such an intense piece of work, written with tears coming down my face. I needed a break from that, to do something fun and light-hearted. This album was joyous for me.”

Trout reunites with friends from the recent all-star Supersonic Blues Machine project, with six-string talents Warren Hayes, Robben Ford, and Eric Gales all contributing to We’re All In This Together. It wouldn’t be a Walter Trout album without the larger-than-life presence of British blues legend John Mayall, who enlisted the guitarist into his Bluesbreakers band way back in 1985. Mayall displays his underrated harp skills on “Blues For Jimmy T.” Says Trout, “am I proud to call myself a former Bluesbreaker? Yeah, of course. What a credential. That is a very exclusive club, and I know that when I’m gone, that’s gonna be one of the big things that they’ll remember me for: that I was a Bluesbreaker for five years.”

Much of We’re All In This Together was created with modern, cutting-edge recording technology, many of Trout’s collaborators sending in their contributions to be incorporated with performances by Trout and his band – keyboardist Sammy Avila, bassist Johnny Griparic, and drummer Mike Leasure – who appear on every track. Producer Eric Corne put together a seamless mix that sounds electrifyingly live in the studio. Says Trout, “it’s very hard to tell we’re not in the studio together. If you listen to the Warren Haynes track, when we get into that guitar conversation on the end – it sounds like we’re looking each other right in the face, y’know?” Prog-rock musicians have been working this way for years and creating innovative and entertaining albums, so why not blues musicians?

We’re All In This Together promises to represent another milestone in a career littered with such. With 25+ years as a solo artist under his belt, Trout is still rockin’ and shooting for the stars, winning over new fans one live show at a time. “I’m 66 years old,” says Trout, “but I feel like I’m in the best years of my life right now. I feel better than I have in years physically. I have more energy. I have a whole different appreciation of being alive, of the world, of my family, of my career. I want life to be exciting and celebratory. I want to dig in. I want to grab life by the balls and not let go...”

Buy the album from Amazon.com: Walter Trout’s We’re All In This Together