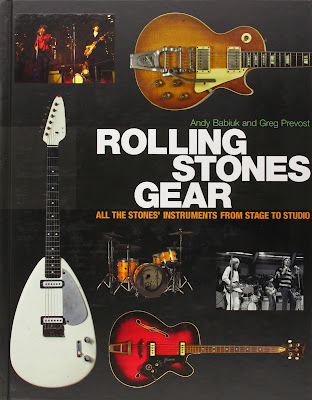 Greg Prevost and Andy Babiuk spent better than three decades together in the legendary “psychedelic blues” outfit the Chesterfield Kings. During this time, the band recorded almost a dozen albums and spent several thousand nights on the road, but their best performance to date may be the creation of Rolling Stones Gear. A massive, oversized, thick 672-page, profusely-illustrated hardback book, Rolling Stones Gear is pricey ($60 list, $45 retail online) but essential for any Stones fan or music gearhead, delivering more than its cover price in history and information.

Aside from their hands-on experience playing in one of the most underrated American rock ‘n’ roll bands of the 1980s and ‘90s, these two writers are eminently qualified to pen Rolling Stones Gear. A few years ago, Babiuk published Beatles Gear, a similarly massive tome that offered insight into “All the Fab Four’s Gear From Stage to Studio,” the book becoming a surprise best-seller. Babiuk is also a world-renowned authority on vintage guitars and the owner of Andy Babiuk’s Fab Gear, a boutique guitar store located near Rochester, New York.


Greg Prevost, of course, should need no introduction – we reviewed his Universal Vagrant album a couple years ago. Aside from Prevost’s lengthy stint at the front of the Chesterfield Kings, the singer, songwriter, and guitarist is a well-respected music journalist, with material published in dozens of magazines and music fanzines worldwide, including Shindig! (U.K.) and Ugly Things. Prevost is considered an authority on 1960s and ‘70s era rock and blues music, and is well-known as a rabid Rolling Stones fan.

Together, Prevost and Babiuk have put together a truly beautiful book, Rolling Stones Gear offering more than just a mere overview of the band’s instruments through the years. The book provides a lengthy and insightful history of the Stones’ half-century of making rock ‘n’ roll, from in-depth writing on the band’s formation in 1962 and background on all the Stones’ individual members to early musical influences and supporters like Alexis Korner, arguably the founding father of the British blues-rock scene.

As mentioned above, Rolling Stones Gear includes hundreds of B&W and color photos – many rare, many previously unpublished – of various instruments, album and magazine covers, band performance shots, and other flotsam and jetsam from one of the most notorious careers in rock music. With detailed documentation of the gear used by the band on every song they recorded (including demo recordings and out-takes), as well as their frequent high-profile (and lucrative tours), Rolling Stones Gear outlines the storied history of the band with enthusiasm and energy.


Featuring brilliant printing and reproduction of its lush photos, Rolling Stones Gear is simply gorgeous, a look befitting the love and labor that went into the creation of the prose that accompanies the intriguing and often informative graphics. Rolling Stones Gear is a hall of fame worthy collection, a fine document of the classic band’s story that would appeal to both the casual fan and any aficionado of vintage musical instruments. As for the hardcore Stones fan, it goes without saying...they’re going to want this book! (Backbeat Books, released January 1, 2014)